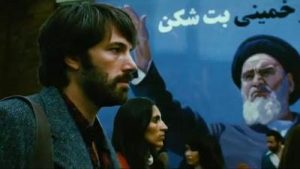 I was expecting a lot from Argo. I had heard all the buzz coming out of the film festivals (especially Telluride) touting it as a sure-fire Oscar contender, if not front-runner. As if that alone wasn’t enough to get me excited to see it, there was the subject matter. I knew this would be the movie, of all movies this year, that would hit home with the greatest impact.

Argo is set against the backdrop of the Iranian revolution of the late ‘70s, when the Shah was overthrown and the fury against the American government that harbored him culminated in student militants storming the American Embassy in the capital of Tehran, taking 52 Americans hostage, holding them captive for 444 days. I’m sure there are many who don’t know this history, or have learned it as just that: history. But I was there, in Tehran, less than a year before the storming of the Embassy, the child of an American Foreign Service Officer assigned to that diplomatic post. One night in early December of 1978, barely 2 years into our 4-year assignment, our family got a call, telling us that it was becoming too dangerous for Americans and all “non essential” family members were to evacuate within 24 hours. I was 8 at the time.

My mother and I were on a specially chartered PanAm jet the next day, with other American diplomatic spouses and children, flying to “safe havens” in the United States and Europe, while our Embassy-employed fathers were to continue their work in a place rapidly descending into chaos.

For the next two months, my mother and I were at our “safe haven,” my grandparents’ home in suburban Connecticut. We tried to live life as normally as possible, I was even enrolled in the local elementary school and found myself in third grade again, learning to make friends and trying to be just a kid. But there were two major obstacles to normalcy during our time as Connecticut residents: Iran’s rapidly increasing revolutionary tilt was the lead story on the evening news every night, and the only contact we had from my father were a few sporadic midnight phone calls and a cassette he was able to record and send to us, promising us he was safe and to not worry.

Then, in February, out of the blue, there was a knock at the door one evening and there was my father, having been evacuated on an Air Force military cargo plane, seemingly just in time. Less than 9 months later, 52 of his co-workers and friends found themselves living through one of the worst terrors imaginable.

So yes, I had an interest in a movie about the Iran Hostage Crisis. Even though I was only 8 years old when we lived in and were evacuated from Iran, I was old enough to remember. I remember what those 2 years living there were like. I remember the most delicious breads that we would buy from the street vendors who had just cooked it in a stone oven, picking out little pieces of charcoal from the still-rising crust. I remember learning to ski on some of the most pristine and gorgeous mountains I’ve ever seen. I remember playing soccer for the first time when I was 7 on the playground of the Tehran American School. I remember the wonderful places we would visit in Iran and neighboring countries, including Turkey and Pakistan. The ruins at Persepolis are unmatched in my travels, as was seeing the Taj Mahal in India, traversing the Khyber Pass in Afghanistan and exploring the bazaars of Istanbul. All of this would not have been possible without being stationed in Tehran. Even as an 8-year old, I knew how special it was.

So as I sat down to watch Argo, I knew I’d have some emotions. While I knew Argo wasn’t specifically about the taking of the 52 hostages, I knew the storming of the Embassy would be featured, considering the story revolves around the 6 Americans who were able to escape the attack and the CIA operative who was able to get them out of hiding and back to the States.

The opening sequence—the storming of the embassy—is harrowing, jarring and difficult to watch. The editing in these sequences is staggering (Oscar-worthy) and it keeps you on the edge of your seat and sick to your stomach. For me, it was especially hard, as I could relate to the place and time and all the memories came flooding back so forcefully.

But then, the unexpected happened. Argo became more than a playing-out of my 8-year old nightmares. It turned into a movie—a really great one.

Director Ben Affleck has created an old-fashioned, classic escape movie against the backdrop of revolution, politics, culture, history and Hollywood. It is exceedingly well paced, well cast and smart. It is perhaps the most patriotic movie I’ve seen in my lifetime, but, at the same time, it is both respectful and considerate to the “other” culture and country portrayed, even the one “against” America. How often have you seen that?

That’s not the only way Affleck and screenwriter Chris Terrio keep Argo balanced and intriguing. They both know how to offset the horrors of the opening sequences with plenty of humor as the movie switches to its other setting of Hollywood, as the “plan” to get the hiding Americans out of Iran is to make them up to be a Canadian film crew on location to shoot a cheesy sci-fi flick. John Goodman and Alan Arkin are perfect as Hollywood insiders who set up the ruse. Their scenes are welcome respites from the seriousness and they are perfect.

Affleck himself is solid as Tony Mendez, the CIA operative whose job it is to go into Iran and get the 6 “houseguests” out (who have been hiding at the Canadian Ambassador’s residence). He is measured and solemn but effective, letting the scope and logistics of the escape plan take center stage. The ensemble cast works well together, even if we really don’t ever feel like we know any of the 6 too well as people. But still, Argo works because it grabs you and never lets you go, building the pace and suspense all the way to the extremely emotional and hair-raising climax. It doesn’t even matter that we know how the movie ends—getting there really is the best part.

So I recommend Argo most heartily. I know I’m probably not able to be completely objective about it and I had a built-in interest in this movie, one you may not have, but besides all that, it is the best movie I’ve seen all year—the most absorbing, the most exciting, the most intelligent and, yes, the most personal.

I wasn’t quite expecting that.