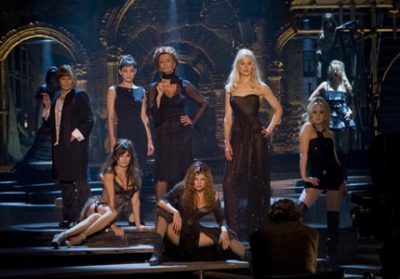 I’m just imagining the pitch for Nine: “I can get you six Oscar winners, another Oscar-nominated actress and an international pop superstar to be in your movie, which is a pseudo remake of a legendary film by a legendary filmmaker and based on a Broadway show. The only caveat is you have to promise each of them a big number. Oh, did I mention this is a musical? No, I don’t really know if each of them can sing, but did you hear what I said? SIX Oscar winners! In ONE movie! Dress them in gorgeous costumes and give them each a really big musical number and you’ll have a hit. It can’t miss. Story? Who cares if there’s a STORY!”

Maybe it’s not as easy to razzle-dazzle ‘em as director Rob Marshall thought after all. Not that he doesn’t give it a really good try.

In Marshall’s first movie musical since his Oscar-winning Chicago in 2002, Nine does, in fact, gather a whopping six Oscar winners under one roof—or at least on one screen—and I have to say I have a hard time thinking of any movie—ever—that can boast that sort of honored ensemble. Here are Oscar winners Daniel Day-Lewis, Nicole Kidman, Marion Cotillard, Penelope Cruz, Judi Dench and Sophia Loren all thrown together in a hotpot of glitz, glamour and old-school Hollywood showcase movie-making. Add to the mix Oscar-nominated Kate Hudson and worldwide pop singing sensation Stacy Ferguson (aka Fergie of the Black Eyed Peas) and you’ve got some megawatt starpower. Too bad the stars shine individually and not as a whole.

Nine is a movie about the making of a movie in Italy in the early 1960s, which has a director, a star, costumes and a set, but no script and no story. It’s illuminating and inherently ironic how reflective this setup ends up actually being, since the final product of Nine, the 2009 version, starring a cavalcade of stars put on screen for seemingly no other purpose than to look pretty and to showcase their skills in one showstopping musical number after another, ends up being a classic example of art imitating art.

Ironic, yes, that there would be a movie about a director looking for a story and that movie seems to be searching for one itself. Nine is a remake, or a take-off of the 1963 Federico Fellini film 8 ½, about a director who is searching for his own inspiration. In Nine, Daniel Day-Lewis plays Guido, a famous director who is in the throes of creative panic just as a new film is about to begin shooting. Everything is ready—the star, the set, the costumes—everything but the script. As Guido clings to his last bit of self-doubting sanity, he looks to the women in his life, from his mother (Loren) to his mistress (Cruz) to his wife (the magnificent Cotillard) to help unclog his panicked creative block.

What this turns out to be is a setup for musical number after musical number, loosely held together by this plot device of a man seeking inspiration. It is thin at best, and is akin to an emcee of a cabaret act, there just to introduce the next performer. Each woman in Guido’s life appears as if in a dream and, as if on cue, music begins to swell and a musical number begins. Throughout the film, each star has their moment in the spotlight, taking turns with their own solo production number, each one lavishly choreographed and visually stunning. Some of the numbers are realistically carved into the story, some are remembrances, some merely fantasy. Either way, it really doesn’t matter, because the long and short of it is that each one is a contrivance, an excuse, a reason to showcase the actor. I guess you really can’t blame anyone involved…I mean everyone looks great, and, for the most part, they all sound great too. There are worse ways to spend 2 hours of your life—just don’t expect to have any great emotional catharsis along the way. Nine is like a gorgeous piece of jewelry…it looks great, but it won’t keep you warm at night.

Surprisingly, despite its light weight, there is still some good acting here. Day-Lewis, wonderfully cast and impressively able to pull off the role of an Italian director (is there anything he can’t do, really?), must have realized early on that he is the member of the cast least capable of the singing/dancing stuff, so he focuses on what he does best, namely character development. So he immerses himself in Guido and, of course, we completely believe him. Penelope Cruz and Marion Cotillard are both exceptional and continue to prove that they are two of the finest actors in movies today and can also sing? Who knew.

But the scene-stealer? With six Oscar winners and another Oscar nominated actress (Kate Hudson, who delivers a stunning number of her own), I bet you’d never guess that they are all overshadowed by a pop star named Fergie.

I love musicals. I’ll admit it. And I think I can spot a good number when I see it. And there is a number in Nine that is edited, choreographed, shot and performed (by Fergie) so brilliantly that, halfway through it, I found myself grinning like a cheshire cat and the goosebumps that riddled my skin when it was over told me that I would be making a return visit to the theatre to see Nine on the big screen very soon, for no other reason than to see that one number—“Be Italian”—again. Marshall may not be the world’s greatest storyteller, but he knows how to maximize the film medium to deliver a musical number with the greatest visual impact. His mesmerizing choreography, all Fosse flair and passionate energy, holds you breathless as it builds to a climax that is riveting and thunderously exhilarating. I dare you to resist the urge to applaud. (There were some in my theatre who couldn’t.) Simply Fergilicious.

So, despite Nine’s lamentable flaws—namely that it really has no plot that could sustain another movie longer than 10 minutes—it is still monumentally worth it. You really can’t see Marion Cotillard and Daniel Day-Lewis on screen and not appreciate what they do together. And the musical numbers—well, nobody does them better than Rob Marshall.

But, in the end, is it much more than a postcard? No. But it is a beautiful postcard, filled with pretty people, gorgeous lighting, exquisite editing and one hell of a showstopper. Still worth the trip.