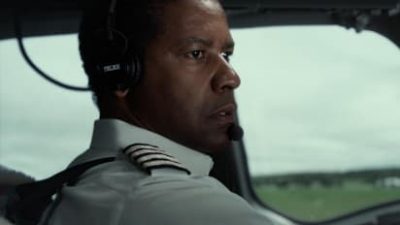 You know how the best part of Saving Private Ryan was the first 20 minutes? Well, the same thing can be said about Robert Zemeckis’ new film, Flight—in a way.

The opening sequence of Flight is a plane crash and anyone who has ever flown a commercial airline will be transfixed, riveted, sickened and horrified. I literally couldn’t move and I doubt I even breathed much. Zemeckis is truly skilled at filming plane crashes—his last live-action movie was Cast Away, which featured a violently captivating plane crash disturbingly well done. The same can be said about the crash sequence in Flight. But while they may be similar technically, the plane crashes in Cast Away and in Flight serve vastly different purposes thematically. In Cast Away, the crash is an essential building block of the story. In Flight, the crash, while serving to set the film’s events in motion, is more than a plot point. Instead, it turns out to be the prism through which the rest of the movie is seen.

The flight is where we meet Captain “Whip” Whitaker, played by Denzel Washington, who pilots doomed flight 227 through harrowing situations, displaying skill and calm under pressure that save many lives. As the movie progresses after the crash, we learn about Whitaker outside of the cockpit, but his heroic actions during the disaster never leave our mind. And this is what makes Flight so interesting. Whitlock is a drunk. He’s arrogant and he’s, quite frankly, a jerk. And if we had just met him in life, without knowing anything about him, we would not only walk away, but we would walk away shaking our heads, assuming nothing redeemable about his character exists. However, having met him first as that heroic pilot, witnessing instinct and skill that we would gladly entrust our own lives to, faults seem easier to tolerate. It’s as if we are constantly checking things off the pro and con list in our heads: yes, he’s a drunk, lying narcissist, but he did save all those lives….

What this movie does is force us to see an addict as defined by more than their addiction. It also makes it very hard to draw clear lines of likeability. Every person has a story, no matter what may define them in the circumstances in which we meet them. And it is this theme that makes Flight compelling.

For most, the strength of this film is Denzel Washington’s bravura performance as a morally questionable alcoholic, but I found his performance to be just a tad overdrawn and I got weary of the “actor-y” moments. This really is a meaty role, but I wonder what an actor with a bit more texture could have done with it. Washington has always been a little too one-note for me, and this character could have used a little more shading.

Still, the movie works because Zemeckis is such a fine storyteller. Many feel this is a character study, but the best part of the film is that it does tell a linear story that is compelling, relatable and well-paced. The supporting cast is terrific, especially Bruce Greenwood, Don Cheadle, Tamara Tunie and James Badge Dale, whose one scene is the best in the movie. However, John Goodman is wasted as badly-executed comic relief, and poor Kelly Reilly could only make me think of how she’s not Jessica Chastain.

Overall, you’ll hear a lot about how Flight is a character study or an examination of addiction, but, truly, you’ve seen those things done differently and better elsewhere. What stands out in Flight is the commentary it makes about how we judge people, what we forgive and what we can’t. It makes it an interesting enough experience to be worth the price of admission. Just be prepared for the opening 20 minutes. You might just need a barf bag.