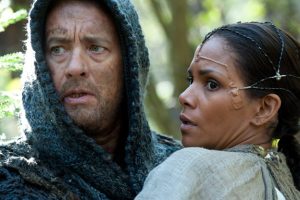 I’m never going to begrudge a filmmaker with grand visions. We need more Kubricks, Gilliams and Malicks in the world. It’s easy to say a movie has “universal themes” or “big ideas,” but it’s another thing to deliver on those promises, to be able to communicate large-scale thematic visions in digestable portions for the casual movie-goer. I respect the filmmaker who doesn’t back down from the challenge—the great ones never do.

The irony here is that more and more directors seem to be embracing that challenge and, in spite of all the seeming obstacles—shorter attention spans, a more distracted viewer, multiple entertainment options—there seems to be an increased appetite for these deeper films. In the past two years alone, there have been several high profile movies with ponderous themes: Tree of Life, Melancholia, Prometheus and The Master are just some of the notable films that have tackled spiritual, philosophical and humanistic themes, far from any formula or genre constraints.

No, there’s something about Cloud Atlas that is just so very different. From having three directors to telling six different stories to having several prominent actors playing multiple roles in various stages of age, makeup and eras, it is a most unique cinematic endeavor. Its first challenge was its source material, the 2004 novel by British author David Mitchell, which boasts over 500 pages and was essentially deemed “un-filmable” due to its complex intermingling of characters and its breadth of time settings, from the 1800s to a post-apocalyptic future.

But anyone who calls anything un-filmable obviously never met the Wachowskis.

The Wachowski siblings, Lana and Andy, are the visionaries behind three of my favorite movies: Bound, The Matrix and V for Vendetta. They are technically masterful filmmakers, but their real gift lies in their ability to expand reality and craft imaginative stories featuring fascinating characters set against people or situations that aim to crush them. A futuristic, era-traveling science fiction scramble with humanistic themes was so in their wheelhouse. But even they could admit that it may have been too much, even for them, so they got some help from a third director, Tom Tykwer, whose brilliant 1998 German film Run Lola Run still counts among my all-time favorites. It was a perfect match.

So…did they deliver? Were they able to make it work, or did the Wachowskis and Tykwer finally bite off more than they could chew? The answer, much like the movie, is not easy—or simple.

It’s hard not to overwhelm with a movie like this. Six stories, so many characters to keep track of, it becomes real work. Right before the movie started, I heard the person next to me (who obviously had already seen it) say to her companion “now, pay attention.” Paying attention isn’t a problem with this movie, thankfully, because the directors know a thing or two about pace. The structure of this film is staggering: all six stories are told throughout the 3 hours (yes, the movie is three hours long) but the transition between each new scene is so cleverly done, always with some reference between the stories, either visual or narrative. These transitions turned out to be my favorite parts of the movie. So, if you’re able to keep your audience with you, keep them focused, the next trick is to keep them engaged in each story you’re telling. And that’s where they lost me.

5 of the 6 stories in Cloud Atlas are compelling and interesting. But all it took was the one wandering, seemingly pointless but sadly dominant story to sour the movie for me. It’s the one story that features the two stars of the movie, Tom Hanks and Halle Berry, the most, so I can only assume to cut it out would have been a deal-breaker. But it hurts the movie enough to make me only modestly recommend it.

But there is still so much in this movie to like. It’s got the Wachowski/Tykwer style: fast-paced, dark and visually stunning. There is a lot of death in this movie, but, then again, this is a movie about all the grand themes in life, of which death is, of course, one. But the main themes in the movie aren’t morbid, they are the common Wachowski themes of freedom, the right of an individual to self-determination and humanity’s inter-dependence: the fact that survival often depends on others. This “interconnectedness” is the overriding theme and it comes across quite effectively. This is a movie about how our choices affect us and how those around us can help to shape our fates, good or bad.

But perhaps the most unique and affecting part of Cloud Atlas is the casting. To further illuminate the interconnectedness between the six stories, actors were cast to play multiple roles across all eras, providing not only a great challenge for makeup artists and the actors themselves, but made for several fun “is that Hugh Grant?” moments for the audience. (I think I still missed one of the roles Susan Sarandon was playing.) While Hanks and Berry are strong, Jim Broadbent and Hugo Weaving steal every scene they are in, as they usually do. Nice counterweights to Broadbent and Weaving’s unmistakable presence are Jim Sturgess and Ben Whishaw, two actors who are able to fold a bit more seamlessly into their multiple roles. I loved the fact that there were three levels of recognizability here, from Hanks to Weaving to Sturgess, allowing the audience to not get too caught up in the name-that-actor game and yet still allow the familiarity factor to flow throughout the stories.

I could get nit-picky here, but I know that I shouldn’t allow myself to get bogged down in the details. Cloud Atlas is, in the end, a fable, intended not for literal interpretation but as an emotional and spiritual journey. It is beautifully shot, incredibly ambitious in scale and humanistic in tone. It’s not perfect, but, then again, why would we want it to be?