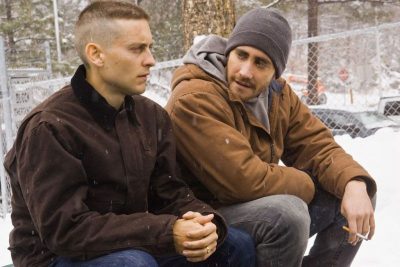 As I walked out of seeing Brothers last night, having plunked down more than I paid for dinner on the cost of admission, I had two questions rolling around in my head:

Whatever happened to Jim Sheridan?

How did Tobey Maguire ever become a movie star?

Jim Sheridan used to be a brilliant director with Hollywood in the palm of his hand. Granted, he had a niche genre, but it was his niche genre: the Irish drama. And nobody told it better. He made his directorial debut in 1989 with a little film called My Left Foot which starred a then-unknown actor named Daniel Day-Lewis, who won an Oscar for an absolutely electrifying performance. Sheridan himself was nominated for Best Director and Best Screenplay. The film was raw, real and spoke to the heart. Sheridan’s next film was another set in Ireland called The Field. His third film I consider to be one of the best films of the 1990s, In the Name of the Father, a harrowing and riveting story of a wrongly-accused Irish man who is falsely imprisoned for an IRA bombing. The film is absolutely searing and relentless, with yet another masterful performance by Day-Lewis. Again, Sheridan was nominated for Best Director and the film was nominated for Best Picture. Sheridan followed up In the Name of the Father with two more Irish-themed tales, The Boxer and In America, both strong dramas with heartfelt stories built on character and setting, intimate and sensitive. This time, for In America, Sheridan was nominated for a Best Screenplay Oscar. And then…the Jim Sheridan we came to know and love went away. Sheridan’s next film, three years after In America, was… Get Rich or Die Tryin’, starring rap star 50 Cent, in a semi-autobiographical story of his own life. This film was so widely panned that one critic actually wrote “Be warned, when a Fedora-sporting Godfather starts wheezing out pearls about violence begetting violence, you may die tryin’ to stop laughin’.” Needless to say, there were no Oscar nominations for this one.

And now, Jim Sheridan, 6-time Oscar nominee, has followed up Get Rich or Die Tryin’ with Brothers, a film with not only not a single Irishman in sight, but not a single interesting character, storyline or theme to speak of. So, seriously, what happened to one of the great storytellers of cinema? And how did Hollywood break him?

Now, to be fair, Brothers certainly had much more potential, at least on paper, than Get Rich or Die Tryin’. I have no idea why the esteemed Mr. Sheridan signed on for the aforementioned rapper bio-pic, and anyone can be steered wrong and make a mistake in their career. And everybody has the right to do something different. I mean REALLY different. So…good for him for breaking out of his comfort zone. Ok.

But now, with Brothers, he has the opportunity to get back to doing what he’s best at: telling a heartfelt story with real characters, strong setting and passionate drama. Well, Jim, sorry. Get Rich or Die Tryin’ was your mulligan. I can’t let you off the hook twice.

Brothers is the story of an American soldier who is deployed to Afghanistan and is shot down. When he is captured by the enemy, he is mistakenly thought to be killed, so his wife and children are forced to continue their lives without him, which includes getting closer to his brother, who ostensibly replaces him in the family. When the soldier finally does come home, traumatized from his hellish war experiences, he imagines the worst has gone on between his wife and his brother and turmoil erupts.

The potential in this film, and the reason I went to it on opening night, lies in the casting of Jake Gyllenhaal and Natalie Portman as the brother and the wife. But, unfortunately, one look at the script would tell you that this is not their movie. Unfortunately, this is Tobey Maguire’s movie, who plays the soldier. And that is why this film is a total and utter failure.

Tobey Maguire has no business being a movie star. To put it simply: he can’t act. He’s weird to look at and has just one facial expression. After a while, you’re just begging to look at somebody else. And, honestly, putting him in a movie with Jake Gyllenhaal and Natalie Portman, who are both strong and textured actors, put him in way over his head. I think everyone must have realized that early on, because it seems like they told Gyllenhaal and Portman to stop acting altogether and then told Maguire to amp up everything in order to be noticed. So, as a result, what we get is this mind-numbing over-the-top melodramatic mixture of Tobey Maguire over-acting and Jake Gyllenhaal and Natalie Portman phoning it in. It is a painful combination.

As for the story, this film is unbelievable. Literally and figuratively. There are so many moments that make you go “what?” including a key plot-turning moment that the entire movie hinges on. If the audience doesn’t buy the decision this character makes in this moment, you’ve lost them for the rest of the movie, and, I’m telling you, it is so unbelievable it’s almost laughable if it weren’t so disturbing.

It’s really hard to watch this movie, with its vivid scenes set in Afghanistan, the same year of The Hurt Locker, another war movie with a much more authentic, respectful and honest tone to it. Brothers uses the war in so many clichéd ways, as a means to an end, with no purpose other than to set up a storyline that never reaches any satisfaction. The entire screenplay, in fact, is so stilted, hackneyed and simple that I felt like I was watching a movie on Lifetime for Women. Except some of those movies actually have energy.

Natalie Portman and Jake Gyllenhaal are completely wasted here, as are, for that matter, other talented actors such as Sam Shepard, Mare Winningham and the up-and-coming Carey Mulligan. They are talents that are given absolutely nothing to play as their characters are simple, one-dimensional and completely lifeless. This entire film is lifeless and, more than that, completely heartless. You just never care about these characters, no matter how hard you want to. This is perhaps what shocks me most about the “Directed by Jim Sheridan” card attached to this film. Sheridan’s films used to have so much heart. They used to make you ache. Brothers, on the other hand, only makes you wonder.