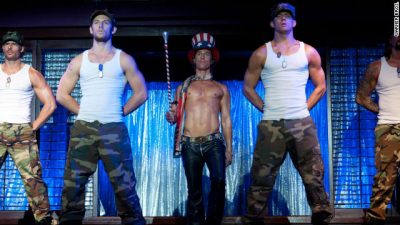 My most recent forays into the movie theatre, Rock of Ages and Magic Mike, both lulled me in through the promise of simple pleasures, but left me curled up in the corner, weeping for what might have been. So, basically, perfect metaphors for life.

Of course, if Magic Mike really were a metaphor for life, we’d all be dumb, pretty and boring, so maybe that’s not the best comparison, unless you’re Scarlett Johansson. Magic Mike is more like people we call “Monets:” they look really great from far away, but the closer you get, the uglier they are. Magic Mike is the ultimate Monet Movie: entertaining in theory (and trailer) and utterly ridiculous in practice (and full viewing). If you want to go see this movie for the eye candy, like I did, then knock yourself out. But consider yourself warned: sitting through this movie is like watching just the “acting” parts of a porn movie: pointless, painful and totally not what you’re there for.

Yes, Channing Tatum is easy on the eyes and he’s charming enough, but what the hell? We’re giving the guy an entire career because he does a quality booty shake? Of course, this seems to be director Steven Soderbergh’s thing these days: trying to establish a serious career out of someone whose talents lie, well, elsewhere. If you missed his attempt at turning mixed martial arts champion Gina Carano into a movie star in Haywire, consider your life 2 hours better. I know Tatum was “established” before this movie, but this clearly is what he’s been working towards: it’s “loosely based” on his own experiences as a stripper and he even produced the thing (which explains a LOT), so let’s not kid ourselves.

Yes, you read that right: this movie is about male strippers. But—and I hate myself for this, really—that just isn’t enough. Somewhere, deep inside, in the darkest recesses of my brain, I apparently long for substance and am strangely disappointed by pure crap. And, in spite of all its muscle-bound, leathery preening, that’s all this is.

And you can’t tell me I don’t know how to enjoy “bad” movies. Showgirls is one of my all-time favorite movies, simply for the absolute top-notch quality of its badness. In fact, I was hoping for another Showgirls-type experience, one where the bad acting and hamfisted dialogue give me brief respite from my life filled with thinking, feeling and enunciating. But, alas, Magic Mike gave me no such escape. It just bored the hell out of me. The stripping scenes were great, but there were nowhere near enough of them and, not only that, but the gorgeous actors they used in the marketing to get us in the door—Matt Bomer and Joe Manganiello, I’m looking at you—don’t even have lines in this movie and are nothing more than beefy wallpaper.

I really can’t go on because I’ll only get myself more depressed. Let’s just suffice it to say that a) I have no idea what’s happened to Stephen Soderbergh, b) Channing Tatum is the luckiest guy alive, c) Matthew McConaughey really needs to get out of the sun and d) the fact that an entire movie is carried by two actors, Channing Tatum and Alex Pettyfer, who, between them, have the personality of a dinghy, should insult me, but, instead, baffles me. Is this really what movies aimed at women have been reduced to—no other choices but The Best Exotic Marigold Hotel or Magic Mike? Wow, at this point I’d even take a Sex & the City 3. Now I REALLY want to curl up and cry.