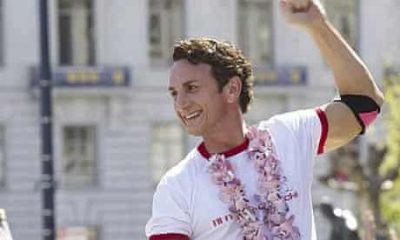 I literally think I’ll scream if I hear one more television show promoting its next crime drama episode as “ripped from the headlines,” so it may seem odd for me to lead off by saying the most ironic power of Milk is its timeliness. But, almost exactly thirty years to the day after the assassination of gay-rights advocate Harvey Milk, the causes he fought for have been front-and-center this election year, which easily makes this the most relevant film of the season, if not of the entire year. The battle this year in California over Proposition 8 put the issue of gay rights back in the national spotlight, exactly where it was back in the late 70’s, courtesy of one Harvey Milk, who led the fight against another (in)famous California Proposition, then Proposition 6, known as the Briggs Initiative, which would have allowed for the firing from California public schools any teacher known to be gay and those known to support them. Anyone currently invested in the fight over Prop 8 cannot help but be drawn emotionally to the frightening reality of history repeating itself now, thirty years later. The staggering timing of this film is overwhelming as I found myself riding waves of emotions I wasn’t expecting and bawling like a baby just from the realization of how far….or how little?…we have actually come in thirty years. This film is not a tear-jerker, by any means. It’s just…emotional. For anyone who is still fighting the fight, this film gets you at the core. You can’t help but feel it.

But what about the movie itself?

Harvey Milk’s story needed to be told, most definitely. Why it hasn’t been done before now is beyond me. Most of us have probably seen the Oscar-winning documentary The Times of Harvey Milk, but there had yet to be a fictionalized bio-pic of the life of the San Francisco city supervisor who was popularly known as the first openly gay elected official, who was murdered, along with San Francisco Mayor George Moscone, by fellow supervisor Dan White. Milk, directed by Gus Van Sant, and starring Sean Penn, is well done, well-paced and lovingly produced.

But here’s the thing. We’re in the upper echelon now. We’re separating the wheat from the chaff this time of year, as we’re looking at possible Best Picture contenders and this is potentially one of them. Would I rule it out? No. But if I look at it on its own merits, I look at Milk as a solid effort, a film with no obvious flaws, a film that moved me emotionally due to the subject matter and features a staggeringly strong lead performance which most definitely will be nominated for Best Actor and will most likely (and should) win.

But, when forced to answer if this is a potential Best Picture winner, I must ask myself all the questions….questions about cinematography and art direction and direction and screenplay and editing and score and even costumes. A Best Picture must be the complete package. Does Milk compare to No Country For Old Men? The Departed? Brokeback Mountain (which, in my mind, WAS Best Picture)?

I have to say no.

Milk, again, for me, is about the power of the subject and the performances. It is a visceral telling about a passionate subject, but there is nothing truly special about the film itself, apart from Penn’s truly magnificent performance. There are some truly outstanding supporting performances, notably James Franco and Emile Hirsch (finally living up to his hype), but, overall, Milk is Penn’s film, through and through, and you’ll go see it if you care about the subject or if you care about great acting.

I will say that this is the most un-Danny Elfman Danny Elfman score you will ever hear, and it’s pretty amazing, and subtle (did I just call a Danny Elfman score subtle?) and tender. The screenplay is straight-forward, with no bells and whistles. And it would be wrong for me to not even mention Josh Brolin, who plays Milk’s colleague and assassin Dan White. Brolin is developing into a strong actor, and he does a good job here, as he doesn’t make the character too farcical, but he could have let loose the reins just a bit more towards the end.

As for Penn’s Milk, his performance is captivating. From the first scene, I lost Sean Penn and only saw Harvey Milk, which, for me, is the sign of a master at work. Penn (and director Van Sant) could so easily have made Milk to be a completely sympathetic character (this is a very subjective portrayal), but instead he is flawed and driven and lovable all at once. You understand and see why people were drawn to him and why they allowed themselves to be led by him. It takes a certain type of person to be a politician, to be an activist, to be a leader, a ground-breaker, the leader of a movement. We see all of this in this character, this meek but not mild, driven and sometimes ruthless man with a heart of gold and a spirit of fire. Penn dominates the screen, inhabits this character and infuses every scene with perfect notes, the perfect tone and delivers a perfect performance.

Yes, Milk did a number on me and left me staggering out of the theatre. I can admit it. But I was not an objective viewer at that moment. Looking back now, from a more rational place, with my heart and stomach back in their proper places, I can evaluate the film for what it was. Don’t get me wrong, it is a VERY GOOD film, and I recommend it to everyone. But if you had asked me as I was walking out, I would have handed it every Oscar in the place and called it the greatest film of all time.

But then again, maybe the emotional perspective is the one we all should stick with anyway.