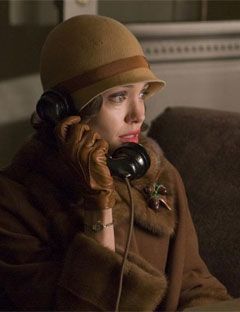 Changeling should be powerful. It should be moving. It should be haunting and devastating and dramatic and gut-wrenching. It isn’t. Instead, it leaves me wondering: what went wrong?

This is an amazing true story that needed to be told by Hollywood. In 1920’s Los Angeles, Christine Collins, a single mother, takes on a corrupt police system, sacrificing everything, all the while suffering the unimaginable agony of searching for her missing child, feeling helpless and alone. On paper, this would seem an undeniable front-runner for an awards-season bonanza and critical success. Starring the world’s most famous actress/activist (and Oscar winner) Angelina Jolie, and directed by recent Oscar favorite Clint Eastwood, Changeling vaulted to the top of Oscar prognosticators lists of must-sees, especially touting Jolie’s performance as a certain Best Actress nominee.

But the movie not only left me cold, it left me befuddled. What should have been an emotional whirlwind of passionate storytelling anchored by powerhouse performances turned out to be a grossly overplayed, poorly written, surprisingly poorly directed and even more surprisingly miscast misfire on all counts. Not only won’t it be nominated Best Picture or Best Director, but I wouldn’t be surprised if Jolie wasn’t even on the short list of nominees for Best Actress. I love her and even I can admit she was the wrong choice for this role and this film.

But what is most wrong with this film is the writing and the directing. This film falls into so many conventional traps I felt like I was watching four different films. Each act of the film is so predictable it makes you want to tear your hair out, and each set piece is straight out of another movie. If you’ve never seen In Cold Blood, One Flew Over the Cuckoo’s Nest, Frances or L.A. Confidential, don’t worry, you’ll get the gist of each of them if you watch this film. I really didn’t know whether to be insulted or bored with some of the dialogue, but, mainly, I wondered how and why such inferior material was chosen by two of Hollywood’s most successful and critically-acclaimed talents (Jolie and Eastwood), who could clearly have their choice of projects. I have to assume that the subject matter may have been close to Jolie’s heart—that of a mother sacrificing everything for her child—and she may have similarly been intrigued by the fact it was a true story and one that needed to be told. Eastwood as well may have wanted to tell Collins’ story, and may have wanted to work with Jolie, as often in Hollywood projects are made so artists can work together, no matter what the quality of the project is (Ishtar, anyone?). What makes matters worse, when you investigate the pedigree of the screenwriter of Changeling and see his background is only in television (and science fiction television at that), it becomes clear that this project might have been made for reasons other than putting the best product onto the screen.

In short, this film is one thing and one thing only: a vehicle for Angelina Jolie to get an Oscar nomination. In fact, if you played a drinking game where you do a shot for every close-up of her face, you’d be three sheets to the wind by the time she sheds her first tear (and you can imagine how bad it gets after that). Let’s not kid ourselves. Whatever film is built around her performance is the equivalent of plywood surrounding steel, it is so shoddy. But nobody cares because this is Jolie’s film. Which is sad, because there are other good performances, notably Michael Kelly as Detective Ybarra.

But mostly what gets wasted here is the story of Christine Collins, who deserved a better telling than she got. Jolie does a fine job, nothing to be ashamed of, but she is just not the right actress for this role. She is too beautiful and doesn’t have the texture to play a reserved woman who is boiling beneath the surface, which was what was called for here. Because she is not able to find the right tone for the character, she ends up sleepwalking through the entire film. It is almost painful to watch at times. It’s not really her fault, it’s just not her thing. She is just MISCAST. Jolie is exotic and fiery and mesmerizing—she just can’t do ordinary.

As for Eastwood, Gran Torino can’t come soon enough. And he better hope his own Oscar bait tastes better than this.