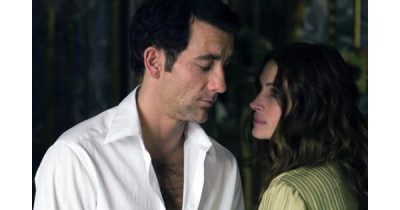 I wasn’t a fan of Michael Clayton. I know, I know, it was a big success, an Oscar nominee for Best Picture, won the Oscar for Supporting Actress, and all that hoopla. But it was just too much for me, got a little too full of itself, was one of those movies that just seemed in love with itself and lost the simple ability to tell a story.

Which is why I was slightly hesitant to see Duplicity, the next film from Tony Gilroy, who wrote and directed Michael Clayton. My concerns about Michael Clayton’s over-stylization coming into play with Duplicity seemed confirmed by the previews for Duplicity, which seem almost to taunt the audience into believing the film is style over substance and dares us to come see it anyway. Yet, believing in the chemistry of the two leads (Julia Roberts and Clive Owen, last seen onscreen together in 2004’s Closer), I decided to give it a go (it helped that I was desperate to see a movie and my other options were Madea Goes to Jail, Race to Witch Mountain and The Last House on the Left). Well, let it be known that Duplicity is stylized, but it certainly does not lack for substance. And it looks like Mr. Gilroy took lessons in How-To-Write-A-Screenplay-About-A-Complicated-Story-That-Doesn’t-Lose-Its-Audience-Halfway-Through since Michael Clayton, because this time, he got it right.

It’s a strange thing about Julia Roberts. I’m not a fan of hers, but I seem to be a big fan of her movies. Which means she chooses very well. She chooses her scripts well, she chooses her directors well, and she chooses her costars well. She knows her limitations, she knows her strengths and she knows how to line up her pitches and hit her home runs. That’s why she can choose to only make a movie every couple of years and is still able to maintain the title of Hollywood’s biggest actress. She has the gift of knowing just which projects are right for her. But, more important than that, unlike other huge stars (Mr. Cruise, I’m looking your way), Julia Roberts is not afraid to be paired opposite another strong star. She shines brightest when she is sparring, dueling and competing with an equally brilliant male co-star, such as Richard Gere, Brad Pitt, George Clooney or, as in Duplicity, the awesomely underappreciated Clive Owen. Their chemistry on screen, just as Roberts’ chemistry with her previous costars, is the main draw of this film, and the number one reason why it works.

Duplicity is about two corporate spies who match wits and who give a whole new meaning to the term “mixing business with pleasure.” Roberts and Owen are perfectly cast as their mutual charm is as disarming on the audience as it is on each other. Even we know there’s a con going on somewhere, but we don’t know who’s conning who, so it ends up being a glorious game of trying to figure out if he’s tricking her or if she’s tricking him or if they are both being tricked or if they’re both in the dark… Meanwhile, there’s a giant corporate game of cat-and-mouse going on that is, by the way, fascinating, and it all is told in a brilliant set of flashbacks with a narrative structure that gives us just enough to fill in the blanks but leaves just enough questions to make an ending that is as good as it gets.

Just as in Michael Clayton, we get to see the underbelly of the corporate world here, but it is so much more fun and, dare I say, intuitive than in its predecessor. There is no razzle-dazzle of corporate finance or legal briefs or any other MBA-required jargon flying around, instead the story revolves around your basic let’s-steal-their-idea premise, and there is a certain sweetness in seeing even the most educated, elevated and respected members of the corporate world reduced to the same schoolyard shenanigans as if they were fighting in a sandbox over a favorite toy.

But oddly enough, when all is said and done about the well crafted story narration, the corporate intrigue and the who’s double-crossing-who spy story, when it comes down to it, you realize at the heart of it all, Duplicity turns out to be, in the end, a love story. It’s subtle, and it creeps up on you, but it’s there, and if you’ve got something beating in your chest, you’ll feel it. Perhaps it’s the quality of the two leads that really brings it home, but this sap loved it. It may not be the most romantic movie of all time, but sometimes the best love stories are the most understated ones. If you like your love stories unromantic, flawed and odd—in other words, real—this one’s for you.

And if you’re looking for a movie that has style, substance, charm, a clever ending and two endlessly watchable stars, Duplicity is just the ticket. And just in time.