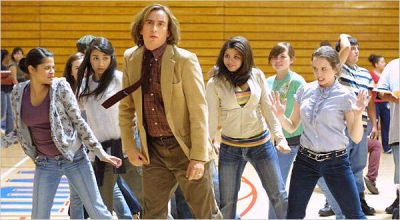 Steve Coogan is the biggest talent in comedy today that you’ve never heard of. You may have seen the big screen bomb Around the World in 80 Days, but only noticed Jackie Chan. Oh, wait, nobody actually saw that, so never mind. You may have noticed him in the independent gem 24 Hour Party People. Oh wait, nobody saw that either. Maybe you know him as the fictional spoofy talk show host Alan Partridge in the hilarious and brilliant BBC comedy series Knowing Me, Knowing You. No, that’s pretty unlikely as well.

Well, your chance to witness a comic genius is in theatres in the form of Hamlet 2.

That’s right. In the spirit of the Christopher Guest ensemble comedies Best in Show and Waiting For Guffman, which spoof pretty much themselves, comes Hamlet 2, a comedy about a loser high school drama teacher who, attempting to save the drama program at his school, puts on his own version of a sequel to the Shakespeare classic, starring the typically rowdy kids in his class, to expectedly riotous and roof-raising results.

If only the movie were actually as interesting as that sounds. For all the self-referential intent, it really doesn’t work and most of the spoof and satire elements fall flat, from the “battle” between the gang-banger students and the squeaky clean white kids to the “let’s save our drama program!” rah rah ending…..yawn. I’m telling you, if I see one more movie that tries to get me to care about a group of random teenagers who rally together for a cause and end up finding they have more in common than they thought they did, I will scream!

But here’s just the problem. If Hamlet 2 were just flat-out SPOOFING those kinds of movies, I would have loved it, but the problem is the film lands itself in some strange kind of no-man’s land between drama and comedy, where it doesn’t quite know what it is. There are moments where it feels like it wants to be Dangerous Minds, and the next moment it’s completely spoofing Dangerous Minds and winks at the audience to acknowledge that fact. I got lost in the back-and-forth and, after a while, found myself not really caring anyway.

BUT…..still I liked it. Why? Steve Coogan. I cannot overstate his charm, comic timing, or his grasp of nuance. He plays a total jerk, yet never once loses the audience’s sympathy, which is a difficult line to walk. He gets you to root for the guy, yet, at the same time, completely understand why his life is going down the toilet. HE always knows the film he is in—a comedy spoof—and he consistently delivers and gets better in each scene. Reminiscent of Steve Carell’s star-making turn in 40-Year Old Virgin, Coogan also takes a hapless loser and makes him charming in an uncomfortable, car-wreck sort of way…..you just can’t stop watching, in spite of yourself. Ironically, both films and both performances get a huge assist from the brilliant and unbelievably funny in her own right (and why isn’t SHE a bigger star?!) Catherine Keener, and here’s hoping her performance in Hamlet 2 is as much of a lucky charm to Steve Coogan as it was to Steve Carell, because Coogan deserves every bit the fame, fortune and career boost after this film that Carell got after his.