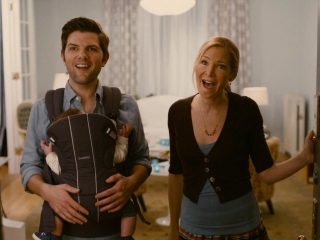 True story: we entered the theatre last night for a showing of Friends with Kids and sat in front of two teenage girls who were huddled together in the back corner of the tiny theatre. They were obviously escapees from the Hunger Games throng that was consuming the lobby and every other crevice of the multiplex on this Friday night. It seemed to be the only place to go to avoid the frenzy, so I guessed they ducked into this theatre to protest or to avoid admitting to their friends that they really had no interest in bowing to the peer pressure. Either way, it was clear they weren’t there to see Friends With Kids because I heard them pull out their smartphone and dial up the trailer so they could know what they had ducked into. And, while watching the trailer, this is exactly what they said to each other:
“Hey, she was in Bridesmaids!”
“He was in Bridesmaids too!”
“OMG, so was she!”

Want to know what this is called? The ripple effect.

Friends with Kids may have nothing to do with the breakout comedy hit of 2011, Bridesmaids, but the fact that four of the actors who were in Bridesmaids are also in Friends with Kids was enough to make these girls interested enough to sit through ¾ of the movie before leaving. And that’s something.

However, Friends With Kids couldn’t be more different from Bridesmaids if it tried. But talent is talent, and Maya Rudolph, Jon Hamm, Kristen Wiig and Chris O’Dowd (from Bridesmaids) prove that they can pretty much do anything.

While it may be the familiar faces that get people in the door, Friends With Kids actually stars two relatively unknown actors, Jennifer Westfeldt and Adam Scott. Scott is best known for the television show Parks & Recreation, and Westfeldt wrote and starred in 2001’s Kissing Jessica Stein. Each actor is a bit quirky and slightly odd, which makes it all the more interesting that they carry this film, which is all sentiment and emotion and, despite the before-mentioned comedy talent, not all that funny. But that’s exactly why I liked it.

Friends With Kids would seem like your standard Hollywood romantic comedy. It even plays like a When Harry Met Sally meets The Object of My Affection for most of the movie. Westfeldt and Scott play platonic best friends who decide they want to have a child before it’s too late. All is going great until one of them realizes they might want to be more than just co-parents. Cue the Kleenex.

But what makes Friends With Kids different from your standard rom-com is the fact that it pulls no punches. The script is witty and biting at times and despite an end result that might seem predictable, the journey we take to get there is different and surprisingly honest. Neither Westfeldt nor Scott are great actors, but they do well within their limitations to engage us in their story and we find ourselves believing in and caring about their relationship.

But it is the peripheral cast that makes the movie truly worthwhile. Jon Hamm is the biggest star here and he is cast perfectly (Westfeldt is his longtime girlfriend) and has a couple strong scenes. Rudolph and O’Dowd are great together and Kristen Wiig, who I consider to be the funniest woman on the planet, is astoundingly good in a small dramatic role. These actors make Westfeldt and Scott better and all of that together helps us to overlook some of the predictable and lamentable story turns that the script takes.

Still, Friends With Kids is a worthwhile evening spent in the theatre and a nice reminder that yes, they do still make movies for adults. Even the occasional teenage interloper can appreciate that.