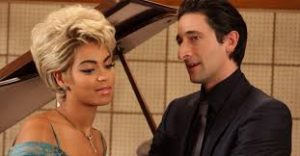 There’s not much that we can truly call our own. The Blues is one of them. Born and bred here, the Blues is a uniquely American art form, one that has influenced countless other musical genres. There may have been the British Invasion, but without the Blues, they may not have had much ammunition.

So you would think a movie that tells the history of the Blues, even if it’s just one small sliver of it, would be interesting.

Cadillac Records, a film that has gotten lost in the holiday shuffle of Oscar contenders and family-friendly fare, is the story of Chess Records, the Chicago record label that signed some of the most influential and successful Blues and rock ‘n roll artists in American music history. Adrien Brody plays Leonard Chess, the founder of the Chicago label, a club owner who convinces a then-unknown guitarist/singer named Muddy Waters to record a song and when it finds an audience, he mortgages everything he’s got to build a studio, form a company and build his fledgling record company around him, with Waters quickly becoming a local star and anchor of the Chess label.

And so where Muddy Waters, the father of modern Blues, is, others come, including harmonica-playing wizard Little Walter, deep-throated Howlin’ Wolf, king of the charts Chuck Berry and sweet voiced Etta James. Chess had years of success, some ups and downs, but mainly it was a hotbed of talented artists and at the forefront of breaking the racial divide.

Too bad the characters in this film aren’t as interesting as the music they make. Except for Little Walter’s occasional moments of self-destructive behavior, these artists are drawn simply and without much texture, and until Beyonce’s entrance three-quarters into the movie as Etta James, the tortured soul looking for understanding and acceptance, the film feels flat and lifeless. Even Oscar winner Brody and the always-good Jeffrey Wright, who plays Muddy Waters, can’t rise above the ordinary as they mark time through an average script that offers nothing new. Two performances that do stand out, and stand out tremendously, however, are Eamonn Walker’s scene-stealing turn as Howlin’ Wolf and Gabrielle Union’s understated and finely-tuned performance as Waters’ long-suffering wife. Walker and Union dominate every scene they are in and offer hope for their potentially bright futures.

It would be easy to compare Cadillac Records to other recent American musical history bio-pics Ray and Walk the Line , but, unlike those films, Cadillac Records has no real focus, no real point of view. But, even though it fails to excite as a screenplay and the characters are lifeless and the story predictable, the movie still works as Blues-History Lite, and is paced well enough to jog us through a time period and a catalog of artists to give us a real sense of time and place.

And then there’s the music. Even though the songs are performed by the actors, and you won’t hear the original artists perform the iconic songs, they are still well worth the time spent in the theatre, even if you’re not a fan of the genre. And if you are, you’re probably not there for the story anyway.

Still, it’s no substitute for the real thing. If you want to hear a Muddy Waters song, go out and buy one of his cds and let his music speak for itself. It would tell a better story than this movie does.