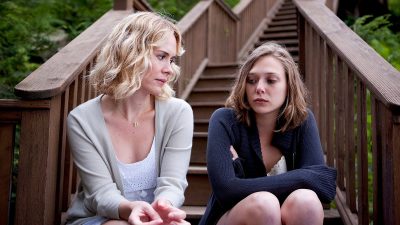 Don’t let the title dissuade you. Martha Marcy May Marlene is not about a woman with a multiple personality disorder. But personality is at the heart of this gripping, nerve-wracking and intense picture about control, individuality and sanity, and what can happen when all three are given up—and the desperate fight to find them again.

The film is about a young woman, played by Elizabeth Olsen, who flees from a cult and reunites with her sister, who had virtually given up on her after not hearing from her for two years. But reunion infers a warm and heartfelt reconnection, which is far from the case with Martha (Olsen) and her sister Lucy, played by Sarah Paulson. Martha and Lucy have seemingly always had a strained relationship, but Martha’s two-year disappearance made whatever was bad between them worse and a loving reconnection would be difficult, even under normal circumstances.

But Martha’s circumstances are far from normal. While the story she feeds her sister (and her stressed-out husband, played by Hugh Dancy) is that she dropped off the radar because she was living with a boyfriend out of state, the truth is that she was taken in by a communal group of men and women on a farm in upstate New York, who offered her a place to belong and, more important, a feeling of family. Revealed during flashbacks, we slowly come to see how this group that embraces Martha is actually a cult, led by charismatic leader Patrick, a smarmy blend of David Koresh and Charles Manson, played with mesmerizing zeal by John Hawkes. Patrick is controlling and charming, and preys on his members’ weaknesses, harnessing their dedication to the group and desire for acceptance for his own pleasures and perversions.

While some of the elements here feel played out and familiar, especially the scenes of life within the cult, Martha Marcy May Marlene gets its power from the sober examination of someone trying to come to grips with reality—her reality—after finding the strength to run away. It is a true character study, though, in name only because Martha’s true self has been so cemented shut that even she doesn’t know how messed up she really is. And that’s what’s so magnetic about her. There’s absolutely nothing black-and-white about her and it’s impossible to get a bead on what’s going on in her head. Is she traumatized? Is she remorseful? Is she scared? Is she furious? Is she about to crack? Is she about to break down? Do we even like her? There are no easy answers when a character is this complicated. And that is all credit to Olsen’s performance, which is not only magnificent, but rich, layered and honest. This is Olsen’s debut performance, and this film, along with her assured Oscar nomination for Best Actress will no doubt launch a long career sure to outlast that of her currently more famous older sisters, the Olsen twins (Ashley and Kate).

First-time writer/director Sean Durkin hits some bumps in the road in the portrayal of Lucy, Martha’s stiff older sister, played with one-note by Sarah Paulson. There’s not much in the way of plot to speak of, and the ending made me want to throw a shoe at the screen, but, even so, Martha Marcy May Marlene is a generally captivating examination of lost self and the extremes to which we will go to feel loved and to save ourselves. Easier said than done.