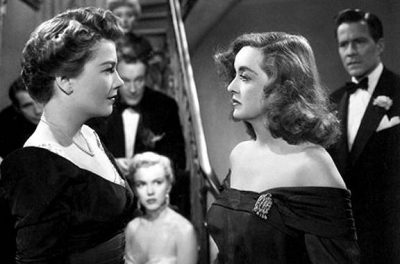 For my first official trip into the vault, I chose a classic that I’m ashamed to say it’s taken me this long to see. All About Eve won the Oscar for Best Picture in 1950 and boasted another 13 nominations. In all, it took home 6 statues, including ones for writing and directing, both for the legendary Joseph L. Mankiewicz.

Also legendary in Hollywood was Bette Davis, one of the all-time greats. Her fame came early, winning Best Actress Oscars for Dangerous in 1935 and Jezebel in 1938. While she truly was a prolific movie star when she was an ingénue, the two performances that cemented her place in Hollywood lore are roles that came later in her career, All About Eve and Whatever Happened to Baby Jane (1962). There is an indefinable toughness about Davis that lends itself to these anti-ingenue roles, where she seems cold, scrappy and absolutely un-glamorous. I have a feeling Faye Dunaway owes her career to Bette Davis, because it was Davis who first made it fashionable for a female movie star to play characters who are difficult to like, let alone love.

I’d always heard that when Bette Davis is on the screen, you really don’t notice anybody else. This is never more true, I imagine, than in All About Eve, where Davis plays an aging theatre actress, Margo Channing, who takes a young admirer, Eve Harrington (played by Anne Baxter) under her wing, only to have her carve her own path to stardom, mostly at Margo’s expense. While Baxter does a good job playing the scheming Eve, and there is a supporting cast that dazzles (George Sanders won Oscar for Supporting Actor and Baxter, Celeste Holm and Thelma Ritter all garnered supporting nominations), All About Eve is, well, all about Bette Davis. She is riveting as the theatre diva who does not go gently into that good night. She plays the humor (and there is a lot of it) with a dark edge, leaving the viewer unsure whether it’s ok to see the sad comedy in it all. But it is ok, because Davis’ performance is so bitingly brilliant that it’s clear who’s in charge. Pity will not be tolerated.

But what surprised me most about this movie is that there is so much more to it than Davis’ performance. While it is a performance for the ages, the film won Best Picture for a reason. It tells a compelling story, has an edgy and exceedingly clever script and a cast, including a very young Marilyn Monroe, that is flawless. There are real relationships here, and the way the actors play off each other is a real treat. If witty banter is your thing, this is your movie.

So many modern films have stolen the premise from All About Eve, in various forms. But this is the first and still the best. Don’t be fooled by the imitators—rent the original. You won’t be disappointed.