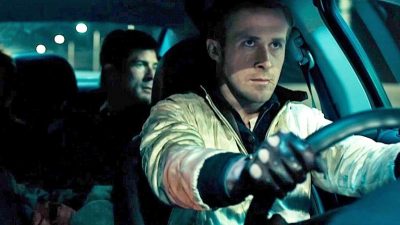 Drive is a movie with a very interesting vibe. It is generally quiet and pensive, similar in tone to George Clooney’s The American. But the difference between Drive and The American is that The American never stops being quiet and pensive, whereas Drive explodes out of its meditative state with a force that is quite harrowing and disturbing. And still, with all of its odd juxtapositions, Drive is a compelling movie, albeit not for the feint of heart.

If you haven’t heard that this movie is violent, then let me be the one to prepare you. There’s not a lot of violence, but what exists here is extremely graphic. Seriously graphic. Like Tarantino graphic. If you go see this movie, you must be prepared for it, because it truly comes out of left field and hits you like a freight train. Not sure if this level of violence is really necessary, but clearly director Nicholas Winding Refn has a vision of how he wants this movie to look and sound, and boy, does he commit. Right or wrong, Drive has a distinctive style and, love it or hate it, it will make its impression.

The first step in creating the tone, atmosphere and ultimate realization of Refn’s vision was the casting of Ryan Gosling as the star. If you’re going to hang such a moody piece on one actor, the actor has to be up to the challenge, and Gosling is at the top of his game right now. His character doesn’t say much, but he doesn’t need to. This movie doesn’t rely on plot devices as much as it does on reactions. Drive is intended to play to your emotions and Gosling is such a good actor that he is able to reflect and react to those manipulations with ease. In fact, it is Gosling’s effortlessness that stands out and is so effective here. He has mastered the poker face.

While there may not be much plot, there is a story here, albeit a simple one. Gosling plays a Hollywood stunt driver by day, getaway car driver by night. He is truly gifted behind the wheel, but we don’t know too much else about him. His chosen profession requires him to live a solitary and transitory lifestyle, never settling in one place. But when he meets a pretty woman and her son in the apartment down the hall of his newest relocation and develops a connection to them, the rest of the film is a giant playing out of an overactive protective instinct that is harrowingly intense—and bloody.

Intense is a good word for Drive. It reminded me a lot of old Miami Vice episodes: tense, moody, vibrant, visual, and pulsing with an ‘80s-type soundtrack that echoes the main character’s moral and ethical dilemmas. The music in Drive even sounds like it’s straight out of a Miami Vice episode. There were moments when I had to remind myself that the movie isn’t actually set in the ‘80s, despite the synthesizer-laced score. (I had half-expected to see Giorgio Moroder’s name in the credits).

Still, Drive is a movie with serious style. It’s intense and violent, yes, but Ryan Gosling sucks you into this character and you find yourself completely drawn into his motivations. Gosling was a major draw for my interest in this film, but it was also the presence of Carey Mulligan in the cast that made me put this one at the top of my list. But how disappointed was I to find Mulligan to be cast in a role that not only doesn’t require any real acting chops, but barely even requires a pulse. Mulligan is a great talent, but if she’s going to continue to go head-to-head with the equally talented Michelle Williams for the title of Indie Drama Queen, she’d better pick better roles than this one in the future.

TV stars Bryan Cranston (Breaking Bad) and Christina Hendricks (Mad Men) also have parts in Drive, and they are each very good in them, but it is Ryan Gosling that makes Drive the memorable experience that it is. The great Albert Brooks is also featured here (as a villain!) and he’s getting great buzz for the performance, but I was, quite frankly, left a bit disappointed and even though I adore Brooks in almost anything he does, I found the performance a bit routine.

Still, if you can handle the violence, and you don’t mind odd soundtrack choices, Drive is an unconventional, nicely-paced thriller that is absorbing and compelling. Just be warned: the adrenaline rush may be a bit intoxicating.