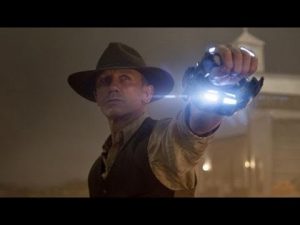 You don’t see this every day. Cowboys & Aliens is a new summer blockbuster action movie that is about, well, cowboys and aliens. Yes, cowboys as in the old West and aliens as in, well, aliens. Yeah, I know.

Ever since Ridley Scott’s Alien and Steven Spielberg’s E.T. captured our imaginations, aliens in one form or another have been a part of our popular culture, from Mork and Alf to District 9 and Thor. At the same time, westerns have been having a revival of sorts lately, with the Coen brothers’ True Grit raking in the money at the box office last year. But combining the two genres? How on earth could you do that without making it look like Plan B From Outer Space? In other words, how do you do that without making it look like a joke?

The answer: make a really entertaining film that never gives you a moment to question it. And that’s what Cowboys & Aliens does. It is a film that moves at break-neck speed, throws every formula and cliché up onto the screen and roars with pure adrenaline. It is chock-a-block with special effects, sexy outlaws, crusty villains, cute kids and enough explosions to knock out a city block of Transformers. And that’s just the simple stuff. When you throw in the mindbending juxtaposition of an alien rolling around in the tumbleweeds with a cowboy trying to shoot him with a six-shooter, then it just gets fun.

Yes, I may be the only one, but I had a blast with this movie. I loved that I was seeing something I’d never seen before, but, at the same time, it was totally familiar. It’s like eating your two favorite foods together for the first time. You never really thought they would go well together until you tried it. I mean, yes, it’s formulaic, and the characters are western genre stereotypes, but, come on, would we really want it any other way? This isn’t a character-driven drama, like 3:10 to Yuma, or even True Grit. This is a summer blockbuster and it gives you exactly what you want: mindless entertainment.

It helps that there are great actors involved and that it has a director who really knows his way around an action movie. Director Jon Favreau delivered magic on the first Iron Man movie (not so much on the sequel) and he again here shows how adept he is at big set pieces. This film really looks great and sounds great too…loved the score by Harry Gregson-Williams. But what works best about this film is the way it looks. Every shot is meticulous, especially for a summer action picture, where you would think a minimal effort would be put into cinematography. But cinematographer Matthew Libatique has a dark and offbeat style (his credits include Black Swan) that really serves this movie. The dark vibe that lingers throughout this film complements the brooding characters and bizarre genre mash-up.

But again, all of this effort would be wasted if it didn’t have actors that understood the complexities of what the filmmakers were going for. Fortunately, Cowboys & Aliens stars Daniel Craig, the current king of complexity—and a damn fine brooder. Craig plays the hero of our story, a guy who wakes up in the middle of the desert with no memory and a strange contraption attached to his arm. From there, we follow along as he tries to put together the pieces of his past while, at the same time, he discovers his vital role in fighting a new enemy from the sky. Craig’s character teams up with the hard-bitten local land and cattle baron, played by Harrison Ford. This is probably the first time in Ford’s career that he plays second fiddle in an action movie, but it is justified here. Ford is the only one who actually plays to his stereotype, as he goes big when everyone else is going small, causing a distracting negative to an otherwise enjoyable ride. There are great supporting efforts here as well, as Paul Dano, Olivia Wilde, Sam Rockwell, Clancy Brown and Keith Carradine (why doesn’t he work more?) all deliver great moments.

Aside from the action and almost all of the performances, what I also loved about this film is the universal idea of enemies becoming friends when they share a common threat. The film starts out in standard Western format: outlaws vs. Marshals, landowners vs. townspeople, cowboys vs. Indians; but when the lights come out of the sky and suddenly they are attacked by a foreign intruder, they are forced to put aside differences and work together for the common good. It may sound trite, but this underlying theme of perspective is always one that works for me.

But I will admit this film is not for everyone. If ever there is a film where you have to check your intellectual expectations at the door, it’s this one. This is pure popcorn at its best and if you spend even a moment letting things like logic or sense get into your head, you’ll derail yourself from one hell of a ride.