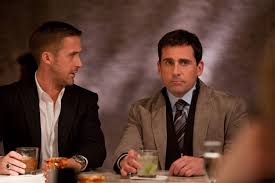 There’s not much I love more than a well-done chick flick. I am a born sap, and therefore putty in the hands of any film that is able to push my all-too-accessible buttons. Steel Magnolias? Four Weddings and a Funeral? Love, Actually? Runaway Bride? Sex and the City? Guilty as charged. But, sadly, the chick flick genre has been suffering of late, brought to near demise by such films as When in Rome, How Do You Know?, Leap Year, The Back-Up Plan, The Bounty Hunter, or anything starring Katherine Heigl. Even I was starting to lose hope, fearing that my desperate need for manipulated emotion would force me to a place I promised myself I would never go: Twilight.

But, thankfully, there seemed to be salvation on the horizon in the shape of a new comedy/drama/romance called Crazy, Stupid, Love, which featured a great cast—not a Kate Hudson or Josh Duhamel in sight. Starring Steve Carell and Julianne Moore, along with red-hot Ryan Gosling and Emma Stone, Crazy, Stupid, Love had all the markings of a homerun: sexy, smart and funny.

Crazy, Stupid, Love does have a great cast, don’t get me wrong. Ryan Gosling is breaking out big this year and Emma Stone is Hollywood’s “it” girl. Julianne Moore isn’t known for comedy, but she is so insanely talented, she can do just about anything. And Steve Carell is just, well, Steve Carell. I’ve loved him in almost everything and it would take a lot to make him unappealing.

So yes, this cast is worth it. They make the most of every moment and are each one so charming and enjoyable to watch that you will never regret spending time with them.

Unfortunately, the script completely fails them and leaves them roaming around a film that is completely inauthentic. It is literally composed of one contrived situation after another, as if there were a room of writers sitting around saying “ok, what should we make them do now?”

The entire premise of the film is that Julianne Moore’s character wants a divorce from her husband of 25 years, played by Steve Carell. We learn this in the opening scene, but we never learn why. We also never learn why Ryan Gosling’s character takes Carell’s character under his wing to teach him how to pick up chicks. But neither of these motivational explanations would be necessary if the story that emerged from these plot devices actually led to some sort of emotional payoff. But they don’t. Instead, the film focuses on big scenes, over-the-top characterizations and situational comedy so forced I was expecting to hear a laugh track.

The film is about love, supposedly, but there is just not enough of a connection with any character to make any of the relationships believable. The characters are cartooned, the situations are contrived and I was bored. And when you’re bored, it’s hard to get emotionally invested.

But what’s odd about this film is it seemed like it was going for more than the cheap weep. The romantic elements of this film are actually its least important parts. While there is some romance (seriously not much) the film teeters more between drama and slapstick comedy. Yes, that seems like an odd combo, which is probably why this is such an odd film. But when you look at the resume of the film’s writer and directors, your incredulousness starts to lessen. Directors Glenn Ficara and John Requa directed Bad Santa, I Love You, Phillip Morris, Bad News Bears and Cats & Dogs: The Revenge of Kitty Galore. Writer Dan Fogelman scripted Cars 2, Tangled, Bolt and Fred Claus.

In the end, this film fails on the page. And it’s no wonder, with the fact that the screenwriter’s only previous experience was in writing animated children’s movies. I imagine it would be tall order to ask a guy who’s used to writing dialogue for cartoon cars to create a layered, character-driven, emotionally satisfying adult dramady. But maybe I’m just crazy. Or stupid.

The bottom line is this: Crazy, Stupid, Love loses its way pretty quickly, but if you’re willing to hang in there and enjoy the few moments of Steve Carell brilliance and the gorgeous physical appearance of Ryan Gosling, then this movie just may be worth it to you…if for no other reason than to hold off choosing between Team Edward and Team Jacob just a little longer.