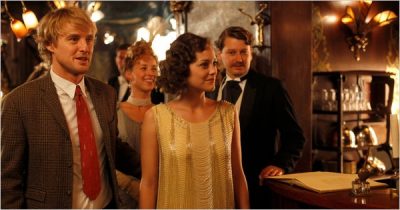 Sometimes, you have to let a movie wash over you. You allow it everything it asks, all the leaps of faith and moments of doubt, because you know, when you do, you will be rewarded. It’s more than a suspension of disbelief, it’s a suspension of cynicism, realism and logic. This is what it takes to watch a great romance—a willingness to immerse yourself, and to believe.

Woody Allen’s new film, Midnight in Paris, is not being sold as a romance, but it is one. Not in any classical sense, but in every philosophical sense. It is a love letter to Paris, but, even more so, it is a love letter to literature, to art, and to mining the depths of our hearts to discover what really moves us.

Anyone who has been to Paris is aware of its magic. Even if you’re not a fan of the French or of the traffic or even the weather, there is no denying Paris’ allure—the architecture, the history, the art, the beauty of the city. To say the city has inspired artists and writers for generations is an understatement. And Midnight in Paris is Woody Allen’s homage to this city’s charm and ability to inspire.

It is not a new concept to call a city a muse, especially Paris, but Midnight in Paris takes it to entirely new heights. Hollywood screenwriter Gil Pender (played by Owen Wilson) is trying to escape his hamster-wheel existence in Los Angeles and feels that Paris is the perfect place for him to finish the novel he’s been trying to write. Since arriving in the city with his fiancée and her parents, who are there on business, Gil has felt a kinship with the city that he has never experienced before. Paris speaks to him somehow, moves him in ways he tries to express, but nobody is listening. His fiancée, played by Rachel McAdams, is self-centered and shallow and isn’t interested in Gil’s dream of walking away from the Hollywood lifestyle that she has become accustomed to. Gil, however, in spite of his milquetoast deameanor and inability to stand up for himself, is determined to pay attention to what Paris has to say to him. And Paris has much to say.

One night, after much wine, Gil decides he would rather walk the streets of Paris than go dancing with his fiancée and her insufferable friends. When he’s out, the clock strikes midnight and he is transported back to Paris of the ‘20s, where he meets literary and artistic figures like F. Scott Fitzgerald, Ernest Hemingway and Pablo Picasso. Whether it’s all a dream or not never comes into question for Gil, as he just goes with it and makes the most of his time spent with some of his greatest idols and influences. The rest of the film is spent bouncing back and forth between Gil’s real life and his “dream” Paris life, each trip another piece in Gil’s emotional puzzle.

What Woody Allen does in Midnight in Paris is present a man at a crossroads, unsure of exactly who he is and where he’s going, and lets the answers come naturally, through an exploration of his own fantasies and imagination. He knows, somehow, that Paris is his soul-mate, and he has to come to an understanding of it before he can embrace it, just as he has to come to understand who he really is and where he needs to be.

Midnight in Paris is a completely charming and endearing film. It is light and frothy and absolutely accessible. Unfortunately, it has one great flaw: Owen Wilson. I’ve never been a big fan of Wilson, I will admit, but he is so terribly miscast here that it is a major distraction. If the part had been cast right, this movie would be nearly perfect. But, as it is, Wilson struggles with nuance and seems to literally stumble through the picture. Wilson’s character is an insecure, anxious and naïve writer, clearly a character Allen wrote to channel his own voice. But Wilson is never able to connect and make a believable character—or even a likeable one. Devoid of any clear personality, Gil is not only overshadowed by the colorful characters who invade his consciousness, but he is swallowed up by them. I would much rather have spent more time with the magnificent Ernest Hemingway (played to perfection by Corey Stoll) or the luminous art-groupie Adriana (the always brilliant Marion Cotillard) than with this bland and boring loser.