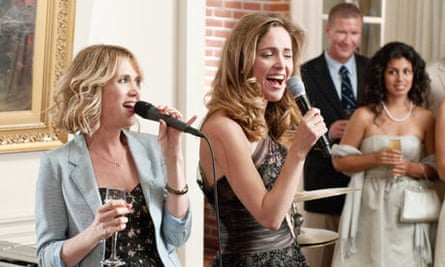 A funny thing happened while watching Bridesmaids: I re-evaluated the chick flick. Some of my all-time favorite movies are tagged with this label: Steel Magnolias, Four Weddings and a Funeral, Runaway Bride and Sex and the City, just to name a few. I love these films for so many reasons, but, mostly, I love them for their overabundance of sentiment and their visions of either idealized romantic love or idealized friendship. But I never noticed, until now, that there is something missing from these chick flicks: chicks.

It’s not that women aren’t in these movies. It’s just that these movies are not actually about the women. They are situation-driven, where all action and drama is built around plot, not character. Don’t get me wrong, it’s always nice to have a story that hums along and gives you nice conflict and emotional resolution, but, once in a while, it’s nice to meet some interesting characters and let them bring you into their world—especially when they make you laugh out loud.

Bridesmaids is directed by Paul Feig (The Office) and co-produced by Judd Apatow (40-Year Old Virgin). But these guys are wholly ornamental here because Bridesmaids is Kristen Wiig’s movie. The Saturday Night Live comedienne stars in, co-produces and co-writes this film and is every reason why the movie is shamelessly entertaining. I’ve been waiting for Wiig to have a breakout role and this is finally it. She is a comic genius and truly holds her own in the one area where men are generally the only players: physical comedy. There aren’t too many actresses who can pull off physical comedy these days—Sandra Bullock, Christina Applegate, Cameron Diaz, Tina Fey, Elizabeth Banks and Leslie Mann are all talented, but Wiig does it with such abandon and recklessness that easily makes her the bravest actress in Hollywood—and the funniest.

And Bridesmaids is funny. It’s not exactly the female version of The Hangover that many people have pegged it as, but it is raw and somewhat raunchy and features an ensemble of actors who raise the level for all comedies that come after it. And the center of the storm is Wiig, whose character’s story is the story of the movie: a woman, lost professionally and personally, desperately tries to hold onto her dignity and her best friend by fulfilling her duties as maid of honor for her friend’s wedding, only to fail miserably at every turn. If this doesn’t sound like a funny premise to you, then you don’t know Wiig, who is able to shift gears so effortlessly and play a character that is just as pathetic as she is charming. We are so used to seeing characters in comedies drawn simply and one-dimensionally, it’s refreshing to see a comedic performance with such texture. It’s hard enough to be really funny, but to be funny and multi-dimensional, as Wiig is here—that’s rare. It’s even rarer to see a big-budget comedy carried by a woman without any support from a man. That’s something even Julia Roberts couldn’t do.

Wiig gets tremendous support from other talented actresses, including Maya Rudolph, Rose Byrne, the scene-stealing Melissa McCarthy, and the one male with more than one line, Chris O’Dowd, who is adorable and needy, pulling a rom-com role reversal. Here, it’s the guy who is solid, sweet and patient, and it’s the girl who is selfish, blind and neurotic. Somewhere, Meg Ryan is sobbing.

And that’s the thing about this movie: like Juno a couple of years ago, Bridesmaids turns genre on its head and presents pratfall comedy with heart, style and substance. And a few vomit jokes. Wow, a chick flick with a little something for everyone. Eat your heart out, Carrie Bradshaw.