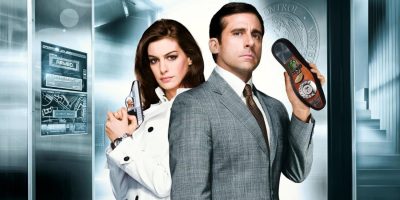 As the Summer of Unoriginality continues, I made my way back into the theatre for the second straight new movie release based on a television show. But, this time, instead of a tried and true fan of the original series, as I was with Sex and the City the Movie, I walked into the screening of Get Smart a blank slate. I had never seen a single episode of the original series from the sixties, starring Don Adams and Barbara Feldon, and what I did know about it was sketchy at best. I figured this was going to be a good time to compare my movie experiences….the jaded, fully-loaded expectations I had going into Sex in the City compared to the minimalist, give-me-what-ya-got approach I had for Get Smart.

To be honest, I felt a little ashamed. I quickly learned, as the release date for Get Smart grew closer, of the reverence people hold for the original television series. Apparently, people love the series and, as I sat in the theatre waiting for the lights to dim, I sensed the excitement in the air. As the movie started, and familiar sights from the series started to appear, there were gasps of recognition from the crowd, totally lost on me. I felt sometimes like a thief. Would they throw me out if they found out I’d never seen an episode? I mean, I was only there to see Steve Carell.

What I then realized was that maybe I had stumbled into a film that would be filled with nothing but “in” jokes. Maybe the whole audience would be laughing at things that I wouldn’t find funny at all…maybe the joke would be on me.

As it turns out, Get Smart is smart. It planned for the eager fans buzzing in front of me, who wanted to see the references to the series, but it also planned for me, and gave it to me straight up, gave me something I could follow and find funny within its own references. I didn’t need six seasons of backstory to figure out that Get Smart is about government analyst Maxwell Smart (played by Steve Carell), who works for CIA-like agency CONTROL, who dreams of one day being promoted to secret agent, so he can combat the evil villains at KAOS. But Smart is just a little too bumbling to be an agent and too good at his job as an analyst to make the jump to field work. Think Inspector Clouseau with a brain. But things happen and Maxwell gets his chance, gets paired with an experienced and sexy agent (played ho-humingly by Anne Hathaway) and they proceed to take on the bad guys. You don’t have to be a fan of the series to take it from there.

Most movies based on television series really don’t need to be made. They get made just to make money. But Get Smart was a good choice. Nobody makes spy spoofs anymore. There is a market out there for spoofs and with James Bond as popular now as he ever was, a spy spoof is perfect. And with Steve Carell at the height of his popularity, he is the perfect casting to play the bumbling secret agent. He is totally believeable as a brainy but awkward superspy, charming and sensitive, and oh-so-deadpan. I can’t imagine any other actor playing this role, and this was the time to make this movie and he is the actor to play Maxwell Smart.

That being said, I don’t understand why the filmmakers chose to emphasize action over comedy. You’ve got a perfectly timed genre that nobody else is doing, you’ve got the biggest comedy star in Hollywood (Semi-Pro took Will Ferrell out of the #1 spot), and you’ve got a treasure-trove of material from the television series to work with. Yet, instead of making the most of the spy spoof elements, which are really well done and funny (thank you, Mel Brooks and Buck Henry, for your original idea for the series), director Peter Segal and the many producers chose to make this an action picture and totally over-produced it. I can’t help but think it would have really worked better as a smaller film, with a smaller scope and definitely a smaller budget. But, for some reason, the filmmakers felt they had to make this charming, funny and what should be simple film into an overproduced and overblown action movie instead of a comedy with some action sequences.

However, mainly because of Steve Carell and the genre itself, which it does manage to stay true to throughout, Get Smart is fun and enjoyable. Although I was disappointed that I didn’t laugh more, the film’s charm and brains make up for it. Missed it by that much.