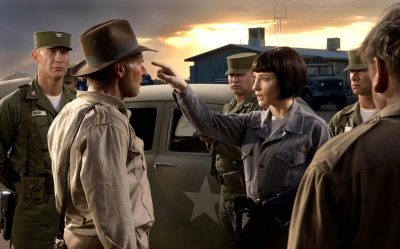 It’s not that I’m not a fan. Raiders of the Lost Ark set the world on fire, brought the action/adventure genre back to the big screen and established a new kind of movie hero—a James Bond for the rest of us—human, accessible, wise-cracking and fun. Indiana Jones actually bled and said “ouch, that hurts!” and admitted his fear of snakes, yet still managed to elude every villain, get out of every tight spot and outrun every bad guy.

And Harrison Ford was just the right guy to play him. There’s a reason why this one actor has played two of the most iconic American movie heroes of the twentieth century (three if you count Jack Ryan). And, unlike James Bond, it’s hard to separate the actor from the character. I was not one of the ones that thought Harrison Ford was too old to do the fourth installment of the Indiana Jones franchise, now, nineteen years after the last one hit the theatres. Yes, Roger Moore was too old for A View to A Kill, but Harrison Ford was not too old for Indiana Jones and the Kingdom of the Crystal Skull.

Besides, Harrison Ford does not fail this film, this film fails Harrison Ford. Director Steven Spielberg and his Saturday afternoon-serial campy over-the-top stylistics only serve to highlight the clunky, brain-dead, far-fetched and downright insane story that is an insult not just to fans of this franchise but to any movie-goer. No matter how charming our hero may be, or how stunning the action sequences are, or how thrilling the stunts are, nothing can erase the inanity of the story, and how truly laughable it is. It’s the giant elephant in the room that nobody wants to talk about but to ignore it would be a disservice. It is truly an insult.

But, unwilling to let this ruin my Indiana Jones experience, I swallowed hard and went with it. I wasn’t going to let a silly thing like a story get in the way of my good time at the theatre.

It seems I was still expecting too much.

Those stunning action sequences and thrilling stunts instead turned out to be worn and tired, with a been-there-done-that vibe. It all felt so staged, one set piece after another. What makes a great action/adventure movie work is its seamlessness, its effortless transitions from narrative scenes to action scenes. We, in our regular lives, don’t break out into car chases, or motorcycle chases, or boat chases, every day, if at all, so, in the movies, these have to happen in ways that are believable. Usually, this is done skillfully and when it works, it works well. When it doesn’t work, it’s laughable. When it doesn’t work in a film of this magnitude and with these expectations, it’s painful. And the stunts here aren’t just forced, some are so awesomely fake, it truly blew my mind.

So I at the very least had high hopes for the performances. Well, Harrison Ford phoned it in, but, again, with the dialogue he was given, there was not much else he could do. The best acting Ford does in this film is making us believe that his fedora actually stays on his head in the most unbelievable of circumstances. Can you please tell me HOW a hat stays on your head after you’ve careened 100 feet down a waterfall and plunged into a river??? Cate Blanchett is a joke as the Russian villain. She’s not a joke, but I’m thinking, HOPING, that she is intentionally playing this character to be the joke, like Gina Gershon did in Showgirls. Whatever the case may be, whatever she is doing is ridiculous and, like Ford, will be remembered more in this movie for what’s on her head than for her acting. Shia LaBeouf is cast as, presumably, the heir to the Indy franchise throne, but doesn’t impress much, except to pose and scowl for the younger members of the audience. I still don’t get the appeal of LaBeouf…but I digress. Karen Allen makes a much-balleyhooed return to the Indy films after nearly stealing the film in Raiders, but is completely wasted here as she has maybe 10 lines, if that. I don’t know why they even bothered. And don’t get me started on John Hurt. If you’re a fan of John Hurt…..stay away. Seriously.

Hell, if you’re a fan of intelligent stories of any kind, stay away. BUT…if you like your action-adventures predictable, your chase scenes story-boarded within an inch of their lives, your charming hero dulled by boring plot points that make NO SENSE, and strong actors brought to their knees by stiff dialogue, then this is the summer blockbuster for you. And that elephant in the room nobody wants to talk about? Just tell it to phone home.