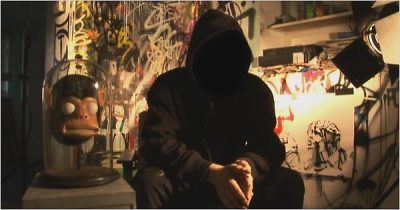 Of all the adjectives I like to see associated with a movie, perhaps “clever” is my favorite. But ever since Woody Allen stopped making Woody Allen movies, cleverness is something that has been sorely lacking in Hollywood. It either surfaces in the occasional black comedy (Fargo, Heathers, War of the Roses) or in a slick modern drama (Juno, The Social Network). And even then, it is fleeting and abandoned too soon.

But the artful combination of intellectual stimulation and humor has found its way back to the movies in Exit Through the Gift Shop, a film that is almost too clever for its own good. Almost.

Looking at all three definitions of the word, Exit Through the Gift Shop—now available on DVD, Blu-Ray and streaming— captures them all. It’s not a stretch to say that this film feels like everything The Social Network was trying to be. It is a commentary of our time, our psyche and how we perceive the world around us. But, more than that, and even more compelling, it is a film about art. And isn’t that what really defines each one of us—what we consider to be and accept as art?

Now if you think a movie about art sounds boring, let me tell you what kind of art and let me tell you whose movie this is. The art is street art (aka graffiti) and the artist is Banksy, the most famous and most wanted street artist in the world. Street art, as they say loudly and proudly in this documentary, is a movement, akin to punk, that defies societal norms and laws and makes statements about the world designed to fly in the face of authority and the establishment. But, because street art is illegal, it has a very short life span—it is usually erased or destroyed within hours of its creation, because it is mounted or painted on public (or private) buildings or land without permission. So, in order to preserve the art, the street artists learned to put their trust in a videographer who found it his life’s mission to document this street art movement and make a film about it.

But what begins as a film about the movement turns into a film about the filmmaker, as Exit Through the Gift Shop is, in the end, a brilliant satirical commentary on art and ego—and how one can feed on the other.

While the best parts of this movie (besides what I consider to be one of the best movie titles ever) are the footage of the street artists creating and “implementing” their work—on walls, bridges, buildings, sidewalks, etc.—the film works in the less-than-obvious ways as well, as it forces you to ask yourself “is this real?”—and never giving you the answer.

But whether it’s real or not is completely beside the point. What makes Exit Through the Gift Shop so brilliantly worth watching is the fact that it is all so potentially real—and we are all part of the joke.

Clever has a new definition.