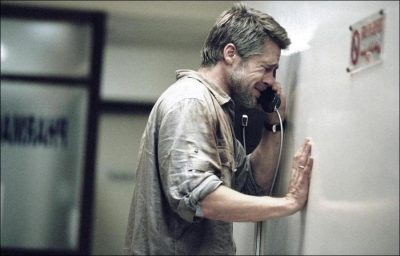 It’s no secret that I wasn’t the biggest fan of last year’s Best Picture Oscar winner, Crash. That film struck me as over-indulgent and pretentious, an attempt by over-eager film-makers to assuage their liberal guilt by throwing in every inter-human conflict possible into a two-hour film.

So it’s no surprise I was a little hesitant to go see Babel, this year’s version of Crash. It’s the same type of film—multiple stories, multiple characters, all seemingly living in separate worlds yet bound together by a common, almost undetectable thread. The filmmakers’ message: we can all impact each other’s lives in some way, even without knowing it. Preparing myself for the inevitable Crash comparisons, I went to see it and, lo and behold, it is a lot like Crash. But it is also a lot UNLIKE Crash.

The international flavor cannot be denied, as it is the essence of the film itself. The film’s themes revolve around languages and borders—-the things we create to unite us within them are the same things that separate us from those outside them and the lengths we go to to cross them and to communicate through them are the things that connect us as humans. It seems almost trite to use a term like fish out of water for such a seemingly deep film as this, but it’s true. Put a person in a place where they feel out of place, or put them somewhere where they can’t communicate and fear takes hold. The need for self-preservation takes over, at the expense of all else, and sometimes basic human decency becomes the first casualty. In Babel, the conflicts we see are within the characters themselves, their battles with their own decency, their battles to just connect with the humans that surround them—through fear and the inability to communicate—and their battle becomes merely to survive.

Babel is a film with big themes. It has aspirations to be deep and profound. It says truly meaningful things about human inter-connectedness in a world where we seem to be so divided and separated—-a truly deep concept, agreed. It touches on the nature of communication and how small cruelties and seemingly insignificant gestures of kindness can amount to tremendous significance in the lives of other people. Yes, Babel is profound and it does achieve great things.

But Babel also did exactly what Crash did. It pissed me off.

What I hated about Crash and what I hated about Babel was the perpetual state of anxiety that the filmmakers kept me in from the first second of the film. I know this was the point they were making, but this is my point: stop banging me over the head with it. I know good people make bad choices and I know good people get put in bad situations and I know bad things happen to good people. What I hate is being forced to sit through every single scene just waiting for the bad thing to happen to the good person. The worst part is when nothing bad even happens….the build up has been there for something bad to happen. This is the kind of film that spends so much time preparing the audience for the fact that the world is a cold, cruel place that the perpetual state of anxiety becomes a state of being. There was a point near the end of the film that I was SO SURE a bad thing was going to happen that I felt cheated when it didn’t. What’s wrong with a film that has set me up like that so terribly?

All that being said, Babel certainly succeeds on more levels than Crash ever did. Its focus is much narrower, which allows us to actually get into the characters and their stories, and to actually care about them. Unlike Crash, where the characters felt like cartoons and stereotypes, these characters are fleshed out and real, and the performances are first-rate, with a performance from Brad Pitt that is his most mature work. The fact that Mark Wahlberg is nominated for The Departed instead of Pitt for his work here is probably more of an indication of the Academy’s support for The Departed, but I certainly feel Pitt deserves a nomination for his work here, it is that excellent.

Talk of this film cannot go by, however, without mention of the performance of Rinko Kikuchi. There aren’t many actresses who can steal a movie away from Brad Pitt (well, except for Angelina Jolie), but Kikuchi does it here. Her performance is absolutely electrifying and you can’t help but be riveted every moment she is on screen. She is deservedly nominated for Best Supporting Actress for her performance here.

Another indelible performance in this film is delivered by Adriana Barraza, who is also nominated for Best Supporting Actress. Unlike Kikuchi, who powers through her performance, Barraza is brilliant even as her character withers and weakens. Playing a stereotype, she takes ownership from the get-go and makes it her own, infusing her with angst and determination and a dignity that she maintains to the bitter end, even as her world crumbles around her. And even as her character becomes morally questionable, Barraza is able to keep the audience on her side, a rare talent.

It truly is sad to see Kikuchi and Barraza up against each other on Oscar night, for the performances are so different and so unique. And the fact that they both exist in the same motion picture are what make Babel worth watching.

So, interestingly enough, Babel has become one of those films that has become fonder to me with time. My initial reaction to the film was much more negative, a gut-reaction to the state of anxiety the film-makers created, as well as the particular style of film-making that this film has (the herky-jerky camera-work and the look-at-me-I’m-directing style) and the message-of-the-moment theme (we are all connected—ho hum). But, with time, I have been able to appreciate the grander themes and to reflect on the truly unique performances that inhabit this work.

So, if you liked Crash, you’ll probably love this film. But, if you hated Crash, give this one a try anyway. You still may hate it, but there are some things that will stay with you long after the I-gotta-see-a-comedy-next anxiety has worn off.