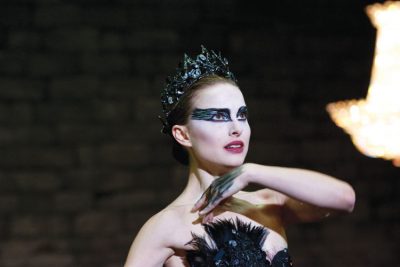 Darren Aronofsky has officially lost me. He alienated me at first with his horrific nightmare of a movie, Requiem for a Dream, which I hated with such intensity that I swore to never see another of his movies. But I softened a few years later when The Wrestler came out, and I decided to give him a second chance. While I wasn’t in love with The Wrestler as a film, it didn’t offend my senses and make me want to throw things at the screen, which, for me, was the first step in mending my broken relationship with Mr. Aronofsky.

But this time, it’s really over.

I heard so much about Aronofsky’s new film, Black Swan, that I was actually looking forward to it. I love love love Natalie Portman and the word on the street was that this was finally her breakout role, for which she will certainly be recognized with an Oscar nomination for Best Actress, and possibly even win. It is short-listed for a Best Picture nomination and both Aronofsky and Portman are being discussed in every Oscar conversation.

Well, I must have seen a different movie.

The Black Swan that I just sat through was an over-the-top, campy, ridiculous and charmless mess. I wonder what movie everybody else saw because I would have liked to have seen it. I would have liked to have seen the movie I was promised: an intense look at a ballet dancer’s life as she achieves the greatest goal of her professional career just as she slowly descends into madness.

Instead we get a movie that plays like B-movie pulp, crammed with over-dramatic takes, swelling crescendos, ham-fisted dialogue and one-dimensional characters. Most surprising of all is how this film imagines itself a thriller. I’m telling you, the only thrilling part of this film is seeing which intended “dramatic” moments in the film garner the biggest unintended laughs in the theatre. And no, I wasn’t the only one laughing.

It’s actually quite a shame and a disappointment for Portman. Word is she intensely prepared for this role and did all of her own dancing—not a small feat. There is no denying Portman’s obvious commitment to the role. However, the script and the direction leave her so exposed, forcing her to repeatedly bang one note throughout the film, devoid of any personality or emotional authenticity.

While I understand what they are going for here—the character is driven mad by her own self-doubt as she battles her own demons, an over-protective and domineering mother and competition from another dancer—the result is just too forced and too silly. I would have really loved to have seen the “psycho-sexual thriller” that the ads in the paper promise, but all I saw was an aimless attempt at art by a director too in love with his own style and imagination.

The only light and pleasure of the film comes from Mila Kunis’ performance, the only one in the film that doesn’t look or feel forced. Barbara Hershey, Vincent Cassel and Winona Ryder play caricatures, not characters, each one more outlandish than the next.

I really hate that I hated this movie. An inside look at a dancer’s life is rife with dramatic possibilities—all of which I would have loved to see—but Black Swan is so loaded with stereotypes and clichés that it never has a chance to be genuine. Portman deserves praise and recognition for what she tries to do here, and all the work she put in, but, sadly, Black Swan will most likely go down in history as a camp classic, a cross between Mommie Dearest, Single White Female, Showgirls and The Turning Point. Natalie, you deserved better.

And for that, Darren Aronofsky, I will never forgive you. And I mean it this time.