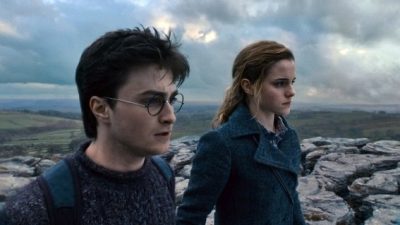 Could we really be at the end? After 9 years and six movies, we have finally reached the (2-part) conclusion to the juggernaut movie franchise centered around Harry Potter, author J.K. Rowling’s tormented boy wizard. After such success, such wonderment, such popularity and such quality, was there added pressure for the final installment(s) to be better, bigger and, well, more magical? If there was, it certainly doesn’t show.

For the casual fan, Part I of Harry Potter and the Deathly Hallows is the most difficult of the 7 films to sit through. The film-makers have split Rowling’s final tome into two films, and, from all accounts, the final installment, due next July, will be a real cracker, with non-stop action and excitement. Well, the same can’t be said for this first half. Much like the first part of the book, Part I is pensive, moody, slow and only occasionally breathless. It represents the maturing of characters, the maturing of the story, and sets the tone and path for the climactic finale. The story is so intricate and complex, with so much ground to cover leading up to the conclusion, Part I feels overloaded with setup and sadly lacking in wonder.

Still, the great burgundy-and-maize-scarved masses will flock to these final two films in this hugely successful film franchise, probably appreciative of the film’s faithful interpretation of the sprawling and ponderous book. But, for me, I was wishing for a little more levity and a little less pensiveness. What has always made the Harry Potter films so magical was the environment that surrounds the plot points. I love to see the brilliant character actors (only the finest British actors in the world need apply), but, mostly, I love to see the world in which Harry Potter and his friends live in. This is a fantasy, after all, and I love to get swept up in the other-worldliness of it all, with special effects and fantastic (and sinister) art direction and cinematography filling the screen. Not that there isn’t any of that here, it’s just much more subdued than ever before.

Still, the Harry Potter franchise still manages to captivate, and director David Yates certainly has made a film worth watching, if for no other reason than to be properly prepared for the final film in July. There still are the magnificent character actors (Helena Bonham Carter steals every scene) and the effects are just as satisfying as you would expect. Daniel Radcliffe, Rupert Grint and Emma Watson have matured as actors and seem to have really grown into their roles as Harry, Ron and Hermione. There is one wonderful and imaginative sequence of animation that really stands out and Alexandre Desplat provides an emotional score to match the sober feel of the film.

But, overall, Harry Potter and the Deathly Hallows, Part I left me wanting more. Wait…was that the point?