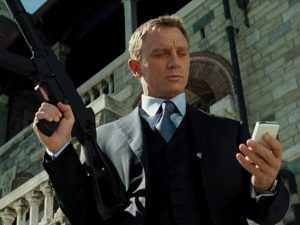 All of these extremely popular film characters have had at least one what’s become known in Hollywood as a prequel devoted to them, a film that examines the roots of our beloved character’s personality or particular position for which we, as an audience, have come to know and/or define them. These prequels often feed on their audiences’ hunger for information, a desire to fill in the blanks of how the character got to be so evil, or who betrayed them back when or what made them the way they are. In an effort to answer the questions, Hollywood sometimes makes it up too much and loses sight of the original character, making the prequel character more interesting than the final product. Instead of a seamless transition where you understand and see the beginnings of personality traits and tendencies, you long for a more complex future character, who you know you’ll never see. The Batman of Michael Keaton, for example, will never be as complex and interesting as the one Christian Bale shows us in Batman Begins.

However, there are the prequels that do their characters justice by not overshadowing their future self but still giving the audience a fresh and new way to look at their familiar character.

He’s blond. And he’s rough and rugged and tough and not very suave. This is obviously not the James Bond of Pierce Brosnan, after some forty-odd years of fighting the bad guys, having used every trick in the book, bedded every Bond girl, thwarted every villain, escaped every dangerous situation with a smirk and a quick wit. No, this Bond is freshly minted with his double-O status, having just notched only his second kill (I wonder how many Bond had gotten to by the time the credits rolled on Die Another Day) and being sent out on his first mission by default, because it involves a poker game and he happens to be the best poker player in British Intelligence. This Bond is quick-tempered and tough-fisted, humorless and seemingly cold-hearted, reckless and oh-so-rugged. It will be interesting, I wonder to myself, to see how they—if they—can turn this guy into Pierce Brosnan in 2 ½ hours.

The casting of James Bond has always been a tricky thing, but this time was particularly rough on British actor Daniel Craig, who, as the first blond James Bond, had entire websites devoted to how much Bond fans hated the thought of him playing the famous spy. But the filmmakers stood by their decision to cast the relatively unknown theatre actor (known mainly to American audiences for his supporting role in last year’s Steven Spielberg film Munich) and now Craig is getting near unanimous praise for his portrayal of Bond as a complex and haunted man facing down his own demons.

For a character only a decade away from near extinction, Bond has been rejuvenated, first by Brosnan, who recaptured the character’s smooth sexiness, and now by Craig, who has rediscovered the character’s animal magnetism and brute strength, not seen since Sean Connery. Ironically, the director who brought the franchise first back to life in 1995 with Brosnan’s first Bond film, GoldenEye, Martin Campbell, is the same director here, and it’s clear he knows his way around this character.

But while the character of James Bond definitely is developing in Casino Royale, and that should make any Bond purist happy, casual Bond fans may miss the usual franchise staples. The Bond girls are absent, as is the sexy villainess (save one blink-and-you’ll-miss-her beauty). There is no gadget sequence, there is no character thrown in strictly for comic relief. In fact, the entire film is quite serious. There are a few jokes thrown in intentionally to lighten the mood a bit, but it does little to slow down the serious tone of the film itself, which is far from the light-hearted romps that other Bonds sometimes become. You want witty banter with Moneypenny? Nope. Sexual innuendos and suggestive dialogue? Not here.

Once I got over the fact that I wasn’t seeing the Bond that I knew and loved, I was able to appreciate the fact that I was watching how the Bond I knew and loved CAME TO BE. All that suave, all that innuendo, all that instinct, that mistrust, that second sense, those eyes in the back of his head, those had to come from somewhere. Those had to be borne of something. No man is born as perfect as James Bond. He is made. And here is where he is made. It’s not pretty, but it’s effective. It’s brutal, it’s oftentimes ugly and it’s hard to watch. But it’s the evolution of a hero. It’s fascinating to see the foundation from the beginning, the foundation upon which Bond is built, and then to see the layers upon which James Bond 007 is built: what turns an average hired gun into a superspy who saves the world.