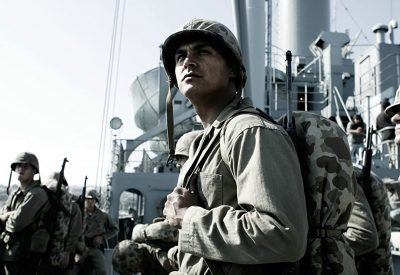 It’s always disappointing when a director wanders out of their comfort zone. While there are some directors who can seemingly do anything, there are others who are limited to certain genres or styles of storytelling and their weaknesses become obvious when they try and conquer new territory.

Clint Eastwood is a director who has been riding high since 1992, when his Unforgiven won the Best Picture Oscar and won Eastwood his first Best Director statuette. Since then, he has pretty much been able to call his own shots, and has been enormously successful, having been nominated for Best Director for his two most recent films, Mystic River and Million Dollar Baby, the latter having won both for both Best Picture and Best Director.

So there is naturally much anticipation surrounding each new Eastwood film, deservedly so, considering the pedigree that he now brings to the director’s chair. But again, as an audience member, you have to hope that a director, no matter how successful they may become, continues to understand what makes them successful and that they maintain their perspective on what their strengths and weaknesses are. In Eastwood’s case, his particular strength is in the telling of intimate, personal and often tragic stories. He has a distinct talent for telling a character’s story, staying focused on the personal narrative and never wandering too far from the core element of his story, which is, at its heart, his character’s personal story. This is true for his biggest critical successes, Unforgiven, Million Dollar Baby and Mystic River, and this is what makes Eastwood such a powerful and successful director. He is, in fact, known as an actor’s director, specifically because the stories he tells are often more the characters’ stories than any external or larger issue-oriented stories. It is not a coincidence that four different actors won acting Oscars for Eastwood’s last two films.

So when I learned that Eastwood’s latest film is a World War II film, and, more specifically, a film about the men who raised the flag in the famous photo at the battle of Iwo Jima, I was curious to see how Eastwood would make a war film, a genre normally reserved for acting ensembles, wondering if he would, in fact, stay true to his style of staying personal and intimate against such a massive and complicated backdrop.

I figured, if anyone can make a war film personal, Eastwood can. But it wouldn’t be easy. War films are not made for individual characters. I challenge you to think of a great war film that doesn’t feature an ensemble of actors. War films are the ultimate ensemble pieces. And ensemble pieces are not Eastwood’s forte. Eastwood excels in telling the lone wolf’s story, of examining the plight of a single soul. War is far too bonding to be that individualistic. That’s not to say that you don’t get to know the characters in an ensemble—it’s just never been Eastwood’s thing.

In Flags of our Fathers, it is obvious from the beginning that Eastwood is clearly out of his element. Because there isn’t an individual character to focus on, he instead wanders aimlessly, trying to capture the atmosphere and the look of a war film. And it all ends up feeling very familiar, and there’s nothing really new here. As characters appear on screen, we are never introduced to any of them. They all start talking and interacting and we are expected to just know everyone’s story. Between the set-up and the action, someone forgot to include the audience. For most of the film, we don’t even know who’s who. Names are bandied about, everyone referencing this person and that soldier and this guy and that guy, like we’re supposed to know who they’re talking about. But we’ve never been given a chance to meet any of the characters, let alone get to know them, let alone invest in them enough to care when we learn that they’ve died or that they’ve done something heroic or cowardly.

What we do know is that a bunch of young, eager Marines are sent to Iwo Jima to secure this pivotal piece of land in the middle of the Pacific. We endure the classicly been-there-seen-that war build-up scenes where we are supposed to be getting to know these guys, but instead, we are hopped around from place to place, face to face, back and forth from the present to before the battle to after the battle…. By the time we figure out where we are and what the setting is, who we’re watching doesn’t even matter anymore. We’ve lost all sense of who we are watching and it becomes what we’re watching. And that’s when the audience is gone. And we never come back.

And this is where the film is over because the audience’s involvement in the characters is the only thing that will give the film legs once the battle scenes are over. More than half of the film takes place after the battle, and after the famous photo has made all the men in it famous, even though only three of the Marines in the photo survive the actual battle. When those three men are paraded around on a whirlwind tour of the States by the government in an effort to boost morale and to raise money for the war effort, the film’s emotional impact is supposed to come from their survivor’s guilt and from the memories they have of the guys they left behind. As an audience, our emotional involvement with these three guys, played by Ryan Phillippe, Jesse Bradford and Adam Beach, also hinges on their guilt and memories, but that never happens because we are never given the chance to really get to know them or to really experience what they experienced or get to know the guys they left behind.

And not only was I disappointed with Clint Eastwood in the fact that he never allowed the audience to emotionally connect with any of his characters, which is a trait, as a director, that was always one of his strengths, but I was disappointed that he basically tried to rip off another filmmaker altogether. Anyone who saw Steven Spielberg’s epic World War II film Saving Private Ryan will never forget the opening 20 minutes, the graphic and amazingly realistic battle scenes recreating the storming of the beaches at Normandy. Well, the scenes in this film of the Marines storming the beach at Iwo Jima seemed to be almost identical to the look, sound and feel of the scenes from Saving Private Ryan.

Whether the battles were similar or not, it doesn’t matter to me. I’ve already seen the penultimate Marines storming the beach war scenes. I don’t need to see them again, especially when there is nothing new to see. When all that’s going through my head is Saving Private Ryan, what does that add to this film? Really? And since you’ve never really established any of your characters anyway, all of those battle scenes are really for naught if we, as an audience, felt we went through all of that for nothing. If we can’t storm the beach rooting for someone and see them through it and up onto the beach and up the mountain and to raise the flag and to come home again, what really is the point?

And I ask the same question of this entire movie. What exactly is the point?

Clint, you lost your way. Stick to the tried and true. Go back and tell one man’s story. Leave the grand epics to Spielberg and Jackson.