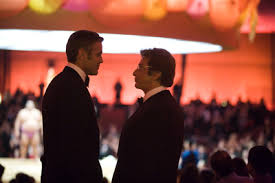 The same can be said for Ocean’s Twelve, which was the sequel to Ocean’s Eleven, the sophisticated, clever and entertaining film that was completely butchered by its sequel. Ocean’s Twelve not only didn’t live up to its predecessor, it nearly nullified any good feeling the original film had. Everyone involved in Ocean’s Twelve was accused of showing up simply for the paycheck and, amazingly enough, not too many involved vociferously argued against that accusation. It’s almost as if Ocean’s Thirteen was made for no reason other than to make up for the insult of Ocean’s Twelve.

Too bad they couldn’t have done better.

What I love about caper movies is what makes a caper movie a caper movie: you get to be a fly on the wall and watch the con happen. It’s the unfolding of the plan, the planning of the heist, the execution of the grand scheme….that’s what makes it fun to watch. In Ocean’s Eleven, what they did so well was take us along as we saw every quick pick of the pocket, every sleight-of-hand, every disguise, every deception as it happened. We were in on every gag, every trick, every part of the con. And when something went wrong and had to be fixed, something believable had to be done to fill in. So much hinged on the smallest of things; a battery, a cast on a wrist—and we were in on all of it. That’s what made the film so much fun.

Ocean’s Thirteen loses that sense of fun and tries to skate by on star power alone. Maybe we’ll be too distracted by George Clooney and Brad Pitt on screen to notice that a major plot point was just taken care of by a phone call. Boring. In the original movie, when a major piece of equipment was needed for the scheme, we got to see the gang go and steal it and the scene was a great one, providing a moment that gave a key plot point for later in the movie. In Ocean’s Thirteen, when a major piece of equipment is needed, they stand around and agree to buy it. Done. Yeah, exciting film-making there. Half of the planning of this big giant caper is done by these master-minds sitting around planning how to dole out their money. Buy this, pay out this guy, pay him, buy that and we’re done. Where’s the planning? Where’s the hands-on scheming?

The main plot point of this film hinges apparently on rigging every game on the casino floor. But how much of the actual rigging do we actually get to see or learn about? Virtually none. THAT would have been the fun part. We are so far removed from the fun stuff in this film that I felt like I was sitting in the bleachers at a ball game and in Ocean’s Eleven I was in the front row behind home plate.

So it sounds like I hated this film. Well, I didn’t. Maybe it’s because I did hate Ocean’s Twelve so much. Or maybe it’s because I love the actors in this so much. I’m a sucker. But Clooney and Pitt and Damon just enjoy what they do so much. And director Steven Soderbergh just knows how to film them and knows what we want to see on screen from these actors. It just works. It is entertaining, it is slick and easy on the eyes. Al Pacino makes for an excellent villain, Andy Garcia is totally wasted in a totally pointless role, and Ellen Barkin is a complete joke. But, overall, the acting and the style of filmmaking is the reason to see this film. Like Ocean’s Eleven, it is slick, clean, charming, and will seduce you for two hours. You’ll find yourself smiling despite yourself. But if you want to respect yourself in the morning, rent Ocean’s Eleven and be reminded how good it CAN be.