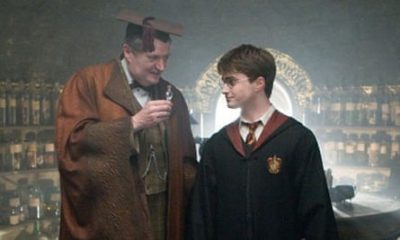 It’s been a tough summer for popular entertainment. Losing two icons and an Oscar winner in the same week was bad enough, but the pain has been compounded in the movie theatre by a dearth of sustainable summer fare, allowing the monolithic and monosyllabic Transformers sequel to dominate the box office. Where was the summer movie magic we could believe in?

In one fell swoop, Harry Potter and Friends have, yet again, thrown their invisibility cloak over all that ails us and have cured the summertime blues with another amazingly fun, if not exceedingly predictable, installment in the franchise that gives new meaning to the word imagination.

Harry Potter and the Half-Blood Prince is the sixth movie in the blockbuster franchise based on author J.K. Rowling’s series of children’s books and it follows nicely in the footsteps of its predecessors, meaning it is filled with charms, both literal and metaphorical, and, most important of all, it is, at every turn, a sight to behold. While the acting in these films is always the most potent ingredient, what is so consistently effective is the atmosphere that is created, both by the director of photography and the art director, by taking us into the world of Harry Potter, this mystical and somewhat dark and complicated magical reality in which our hero lives and travels, from the alleys of London to the backwoods behind Hogwarts—every inch of the screen is lavishly painted and brought to life. There perhaps has never been a series of films that has had such a unique life of its own as this one has, except maybe the Lord of the Rings trilogy, but those films don’t have nearly the warmth that you have here.

Yet with any Harry Potter film, there is also a darkness, a danger and an evil lurking around each corner. It is in these contrasts, the light and dark, the good and evil, where our hero lives and where these films succeed. And what makes them so much fun.

But every good thing must come to an end, and Harry Potter and the Half-Blood Prince unfortunately feels a little too much like the third act before a grand finale (there will be two more films after this one), as it spends a great deal of time preparing us for what’s to come. It’s almost like watching a cowboy posse load up their shotguns and saddle up their horses before they head out for the big shootout. It builds the suspense, but having to wait to see any shots fired is a little frustrating.

Still, the film does have enough to make it compelling summer fun, beginning with the addition of the brilliant Jim Broadbent to the cast as the curiously upbeat Professor Slughorn, who provides a revealing glimpse into the backstory of He-Who-Must-Not-Be-Named. The rest of the members of the British Acting All-Stars are exceptional, as usual, particularly Alan Rickman as Professor Snape and the awesomely wicked Helena Bonham Carter as Bellatrix. But, as ever, it is the trio of teenage stars who must carry the film, and they do so with ever-increasing ease. Emma Watson seems to have grown the most as she now infuses the brainy Hermione with humor and hormones. Daniel Radcliffe, who once let Harry play him instead of the other way around (and once seemed so overwhelmed by his deer-caught-in-headlights mega-super-stardom role), has truly come into his own and plays Harry with much more confidence and subtlety—-in other words, he can actually act now. Unfortunately, the same can’t be said of Rupert Grint, who plays Ron, who hasn’t grown much at all as an actor and still comes off as somewhat dull, but fortunately dull actually works for the character he plays, so he is able to pull it off while being charming enough, thanks to the stark contrast to the strong-willed Hermione and the confident Harry.

The trio have come a long way and Harry Potter and the Half-Blood Prince focuses much of its story on their relationships with each other and their respective and potential love interests, which is long overdue. It would have been nice to have seen a little more action, but we know that’s coming later. Overall, if you’re looking for a film with top-of-the-line production values and acting, a movie experience that will take you into a world and keep you there for two hours, and completely leave you wanting for more, then you just hit the jackpot. If not, then you’re probably sitting on a beach somewhere. Not reading Harry Potter and the Deathly Hallows.