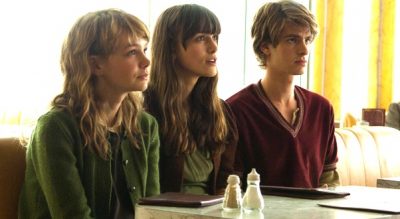 Philosophers have dealt with issues of ethics, morality and utilitarianism for centuries, asking and debating among themselves the greater questions of humanity, searching for answers for the perhaps unanswerable. Why am I bringing this up at the beginning of a movie review? Because the movie I’m reviewing is Never Let Me Go, the new Mark Romanek film, based on the novel by Kazuo Ishiguru. While far from being a philosophical debate picture, it is a film with serious philosophical themes, as it forces its audience to face some of life’s deeper questions including what is the meaning of life, what constitutes a soul and when exactly do the ends justify the means.

I guess it’s safe to say summer is over.

What’s interesting, however, about Never Let Me Go is that it is a philosophical movie that never once poses a philosophical question. It merely presents a reality and lets it play out, and its impact lies in how each viewer chooses to question it, judge it, and, ultimately, sit with it.

I can’t imagine there are many easy ways to review this film without giving everything away. Most films are allowed a brief setup line to give its audiences a sense of it—enough of a story description to allow you to decide whether you want to see it or not. For example, you can say, about The American, that George Clooney plays a hitman, and the movie hasn’t been ruined. But, with Never Let Me Go, the story set-up is the movie. The reality of the plot is its central issue. There is no way to discuss what needs to be discussed about this film without dulling its entire emotional and intellectual impact. And I refuse to do that.

So I am left to offer you this about Never Let Me Go: it is a slow, deliberate and wholly British film (read: stiff and unemotional) that will gut you. Kenneth Turan of the Los Angeles Times perhaps described the film best when he said, “This is a moving and provocative film that initially unsettles, then disturbs and finally haunts you well into the night.” Bingo.

Never Let Me Go is a science fiction film, in the sense that it offers an alternate reality. But that reality is so familiar to us that we don’t question it until we are forced to. And you’ll know when that is, because that’s exactly the moment when your stomach starts to turn.

At the least, you probably want to know this: is Never Let Me Go a good movie that you should make the effort to go see? Well, that depends. Do you like your movies subtle and slow, deliberate and detached, passionless and pensive? Before you answer, let me ask you this as well: do you like movies that stay with you? Do you like movies that question everything and twist your worldview, stimulate discourse and provoke thought?

This movie is about as easy to pigeonhole as it is to let go of.

What is easy to talk about are the performances. Never Let Me Go stars Carey Mulligan, Keira Knightley and Hollywood’s current “it-boy” Andrew Garfield (the next Spiderman) and two of their performances are powerful and haunting. Mulligan and Garfield deliver performances that are true and taut, restrained and real. Mulligan proves that her star-making performance last year in An Education was no fluke and Garfield, who also stars in the upcoming movie The Social Network, proves he is a force to be reckoned with. Thankfully, they both make up for Knightley’s lackluster screen presence and her—I’ll just say it since nobody else seems to want to—inability to act. I have never understood Knightley’s appeal, especially in critical circles, but all of her weaknesses are exposed alongside Mulligan and Garfield, who run dramatic circles around her.

Knightley’s performance aside, Never Let Me Go is a provocative, intense, brooding and haunting film that raises interesting questions, provides controversial answers and leaves you every bit unsettled. In my opinion, that’s not always such a bad thing.