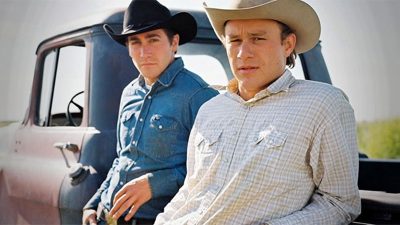 Love stories are not that tricky to pull off. All you really need is a couple with some sort of chemistry and the audience will fall for it. Why? Because everyone can relate and there’s not one specific kind of romance. Romantic situations are like wine: there are a million of them.

Love stories about “star-crossed lovers” have been pretty common in Hollywood, from the original, Romeo & Juliet, to its many imitators, from West Side Story to Spider-Man. Even more common these days are love stories involving infidelity, from last year’s Closer to this season’s much-talked about Woody Allen film, Match Point, where the various characters choose to cheat instead of getting out of loveless marriages.

Somewhere between the star-crossed lovers and cheaters are the characters in Brokeback Mountain, the film that is stirring the most buzz with the critics at the moment, having already been named Best Film of the Year by the New York Film Critics and the Los Angeles Film Critics, and has snagged 7 Golden Globe nominations, the most for any film.

Brokeback Mountain is about two male Wyoming cowboys who fall in love but can never admit this love to each other or to themselves so they each marry a woman and have a family, while continuing to carry a torch for each other. But as opposed to the standard Hollywood movies where cheaters are portrayed as selfish and/or greedy, these characters are understandably conflicted by their feelings that, if acted upon openly, would subject them to everything from scorn to possibly even violence in their small-town, masculine-dominated 1960’s heartland world. These characters both can’t and won’t be together and the pain of their inner conflicts is palpable, especially in this slow-moving, deliberate film crafted with gorgeous and intimate direction by Ang Lee, the master of all genres.

Starring Jake Gyllenhaal and Heath Ledger, two Hollywood hunks who are at the peaks of their careers, Brokeback Mountain is an Oscar front-runner for many valid reasons. The performances are excellent, particularly Ledger’s, whose characterization totally submerges his Australian roots and you really believe he is a down-home good ‘ol boy. I am a great fan of Gyllenhaal and I applaud his bravery at taking on this part, as his stock is soaring in Hollywood. Playing a gay cowboy could be dangerous to a mainstream actor, even today.

Ledger and Gyllenhaal are matched in their performances only by the scenery, which is photographed in amazing breadth by cinematographer Rodrigo Prieto, designed to mirror these characters’ you-and-me-against-the-world situation, where the only place they can feel free to admit and act on their truth is hundreds of miles from the nearest human. Now THAT’S isolation.

The film is quite slow and, as I mentioned, quite deliberate, as the emotional journey of these two men, from vibrant passion to subdued repression, is like a slow-moving boat ride. The pace is almost hypnotic, as there are very few moments of anything loud or dramatic, but that pace is just what sucks you into these characters because it’s the passage of time and the years of longing and unfulfilled expression that grab you from the gut. This film is definitely more gut-wrenching than heart-wrenching.

All that being said, I do recommend the film but it is a strongly qualified recommendation. And here’s why. Most films you buy your ticket for you have a sense of what that movie is going to be about but you don’t know the whole story. For instance, last season’s Oscar winner for Best Picture, Million Dollar Baby, was a film about a woman boxer and her manager. A big film this year, Walk the Line, is the biography of Johnny Cash. The movie Titanic is about the sinking of the Titanic. Gladiator was about, well, a gladiator. Most movies can be summed up, so you have a sense of what you’re going to see. However, we all have the expectation that once we have gotten into the actual movie, it will take us places and tell us stories that we weren’t expecting. Million Dollar Baby was a boxing movie, but it wasn’t about boxing. Titanic’s story (what there was of it) was set against the backdrop of the ship sinking. And I’m sure Johnny Cash’s life has many elements that we don’t know about until we see the movie. And Gladiator told so many different stories that it defied its own gladiator-movie label. That’s where the enjoyment of a movie comes from.

My big problem with Brokeback Mountain is there’s nothing more to it than the one sentence description garnered by the previews: two gay cowboys fall in love but can’t be together so they marry and spend their lives longing for each other. There you go. It’s a fine premise and a fine outline for a movie, but that’s ALL THIS MOVIE IS.

Not only does the screenplay do a disservice to the audience, but the simplicity and over-publicitization of the “gay cowboy” angle will really hurt the film in the long run, in my opinion. Going into the movie, who doesn’t know that Heath Ledger and Jake Gyllenhaal play gay cowboys? Can you imagine how different the experience would be if you didn’t know? I am so envious of the lucky few who saw advanced screenings without knowing. It reminds me of my experience seeing The Crying Game, the biggest don’t-reveal-the-secret film of my generation. Knowing too much can definitely alter the experience. And when that “secret” is all there is to the film, there’s not much left for the audience.

I was in a totally progressive, sold-out audience, and I could feel, during the first 20 minutes, how everybody was just waiting for “it” to happen. And then, once it does happen, there’s nothing left to look forward to. You pretty much have to be nourished by scenery and performances. It’s a good thing that both are totally sumptuous.

My rating: ****= worth paying full price in the theatre
Official Brokeback Mountain website