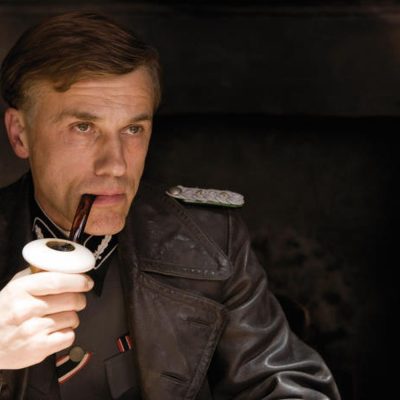 No matter how you believe you may have fooled yourself into thinking otherwise, you can never be quite prepared for a Quentin Tarantino film.

Tarantino has made a name for himself by assaulting audiences. He assaults your eyes, your ears, your mind and your gut with each film, from the blistering rat-a-tat dialogue and violence of Reservoir Dogs to the brilliant narrative structure art form of Pulp Fiction to the achingly and gloriously genius visual spectacles that were Kill Bill volumes 1 and 2. So, when given the subject of a band of Jewish-American soldiers set on killing Nazis in German-occupied France during World War II, you would expect nothing less than a full-frontal assault on the senses, a canvas full of pedal-to-the-metal bloody violence marked by a Tarantino flair for the campy melodramatic.

Inglourious Basterds is nothing that you would expect.

I was expecting two hours of gore and spilling of Nazi entrails. Nope.

I was expecting two hours of visual delights catapulting their way across the French countryside, as we follow a rogue band of American mercenaries set on righteous justice—sort of The Great Escape grand finale done right. Nope.

Instead, we got one of the most inconsistent, inexplicably bipolar films I have ever experienced, a film that can’t decide if it’s Casablanca or Carrie.

This film can wholly be divided into scenes and performances, some of which are so amazingly brilliant they can and do stand on their own as memorable and invigorating and others that are so painfully bad that you look around to see if you’re the only one in on the gag.

This film has been sold as a farce. The problem is, only a part of the film is actually made as a farce. And it’s the rest of the film that actually works. It’s as if Tarantino is hiding behind the things he thinks he’s supposed to do—the campy and the bizarre and the (I’ll just say it) stupid—so he can slip in the scenes of really great film-making that make this picture worth seeing. There are scenes in Inglourious Basterds that feature taut direction, absolutely riveting acting, suspense, and terrific dialogue that actually are so un-Tarantino like that you forget you’re watching a Tarantino film.

Until the next scene when something really campy happens to jolt you back to reality. Or Brad Pitt speaks.

Now I’m a huge Brad Pitt fan, but he ruins this film. Flat out ruins it. Yes, I understand farce and I understand camp and I understand going over-the-top, but he is the only one doing what he is doing, so it is not only distracting, it is outrageous. When you make a choice to be so big, you’d better be better than everything else on the screen or it will fall flatter than a pancake. And Pitt’s performance lands with a giant thud from the first word.

It’s too bad too, because every other performance is flawless. Particularly exceptional is Christoph Waltz, who plays Colonel Landa, the most reviled Nazi officer seen on screen since Ralph Fiennes’ Amon Goeth in Schindler’s List. Waltz’s Colonel Landa is sleazy and cunning, pure evil incarnate and Waltz plays him with a deft hand, never over the top, never a caricature, but as a nightmare that would stalk your dreams. This is Waltz’s first English-speaking major motion picture but I have a feeling it is surely not to be his last.

The casting of native speakers throughout the film lends an authenticity to this film that I was not expecting and gives it considerable weight. Most of the film is in sub-title, between all the French and German that is spoken (bravo, Quentin), and the actors here are universally remarkable, and I hope this gives them all a boost in their international careers.

The acting aside, it is the wild vagaries of the film-making style that makes Inglourious Basterds so unique. The wild mix of genre, tempo and mood are interesting at first, but you figure out early on which ones are working and which ones aren’t, so when the film makes its stops at the good parts, you hope it lingers there. And, fortunately, it does. Tarantino, who also wrote the screenplay, has shown a gift for dialogue in the past, and he shows off again here. Fortunately, he stays away from his sometimes-annoying pop culture references and keeps to the story and the plot, actually establishing characters and building tension.

In the end, though, there is no escaping the essential truth of Inglourious Basterds. It is a giant revenge fantasy. Who hasn’t dreamt up the most brutal way we could have eliminated some of the most horrible butchers of the twentieth century? And Tarantino does get carried away. It does get silly, it does get farcical, it does get over-the-top. There are some sequences that are so stupid that I wanted to walk out. But then there would be a sequence or a performance that would blow me away and I would shake my head and wonder how those two scenes could be in the same film.

That Tarantino. What a glorious bastard.