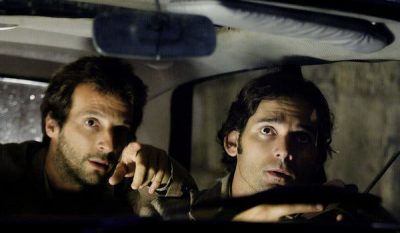 Steven Spielberg’s latest foray into the political/historical arena is a textbook display of what kind of film can be made with a real screenplay and a real director. This film would be powerful enough on its own, but because it happens to be the first film I’m seeing after Syriana, I can’t help but compare the two—and the differences are staggering.

Both Syriana and Munich are complex stories set against a grand stage, political and personal, multi-faceted and based on real events. They each deal with the Middle East and its many issues, perspectives, agendas and divisions. They each deal with an ultimately hopeless situation, where people are pawns in a larger game, driven by governments and politicians, greed and religion. Passionate people who are answering their country’s call get caught up in the complexities of loyalty, patriotism, ethics, moral questioning and, ultimately, the cruel and untenable reality that whoever has the most money has the most control.

This is some serious stuff. These are complex and current issues, with many sides and angles to cover and to translate them to screen in one easy-to-follow fell swoop is no easy task. But why does Munich succeed and Syriana doesn’t? Because Spielberg knows how to tell a story. Love him or hate him, he knows how to tell a human story and set it against any backdrop, no matter how complex. Syriana didn’t tell any one story, and that’s where it lost its audience.

Granted, Munich has the benefit of having a very familiar story to build on. It is based on the Israeli government’s (unauthorized and unofficial) manhunt following the Palestinian capture and massacre of 11 Israeli Olympic team members during the 1972 Munich Olympics. But while you may think Munich is a 2-hour re-creation of the siege itself, it isn’t. Although Spielberg does re-create the horrible moments (interspersed with real news footage), the majority of the film follows an Israeli hit squad, hired to assassinate, one by one, the Palestinian terrorists who masterminded and planned the attack. Munich is about revenge.

Spielberg may have been in over his head on this one, if he hadn’t been guided by two esteemed screenwriters, Tony Kushner and Eric Roth, who undoubtedly contributed to the film’s legitimacy. Kushner, the acclaimed playwright (Angels in America) and Roth, who penned Forrest Gump and The Insider, supply the words to supplement Spielberg’s imagery, and the result is supremely powerful. Spielberg was initially reluctant to tackle such a seemingly personal and political subject, and many critics were afraid that Spielberg’s perspective would come across as pro-Israel, but Kushner and Roth have guided the film bravely right down the middle, allowing the audience to come to its own conclusions.

The international cast is equally top-notch, led by Australian Eric Bana (Troy, The Incredible Hulk), who plays the haunted, introspective leader of the hit squad. Bana’s character is both righteous and moral, conflicted and clear, conscience-driven and loyal to the cause. The lines between right and wrong, ethical and unethical, and moral and unjust are blurred for everyone when the stakes are so high and the motives are so personal, and Bana does well to traverse the emotional mindfield laid out by such complexities. His performance is soulful and affecting and should not be forgotten at Oscar time.

Spielberg does well to support Bana with an exceptional, if little-known, supporting cast, including Brit Daniel Craig (who won’t be little-known for long, because he’s the next James Bond), German actor Hanns Zichler, French actor Matthieu Kassovitz (who you’ll remember from Amelie), Irish actor Ciaran Hinds, and the indominable Austrialian Oscar-winner Geoffrey Rush. They are all excellent and none stand out more than the rest, making this a true ensemble piece.

Munich is not an easy film to watch. It is much more violent than I had expected, but it is also much less preachy. The makers of Syriana went to great lengths to try to communicate the many sides and agendas to the war for oil in the Mid-East, but Spielberg lets his story speak for itself as neither side of the Israeli/Palestinian conflict goes untold and the result is an informed audience, emotionally connected and riveted by the attempt to grasp the hopeless nature of a conflict that may have no end.

Munich is a very long film, clocking in at over 2 and-a-half hours, and it could use a bit of editing towards the end, but it is well worth the investment of time and money. Few films can give a historical lesson, a political perspective, and an international commentary, all with a real human story thrown into the mix.

Spielberg does well to surround himself, yet again, with nothing but the best. The Production Design by Rick Carter is particularly stunning, as 1970’s Europe lives onscreen, down to the smallest details, painstakingly true.

Not since Saving Private Ryan in 1998 has Spielberg attempted something this meaty and personal. It’s good to have him back.

My rating: ***= worth paying full price