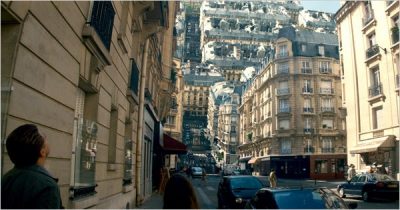 “What we usually call ‘consciousness’, the fact that I am aware of myself and therefore in a sense can appear to myself, would never suffice to guarantee reality.”
-Hannah Arendt, The Life of the Mind

“All that we see or seem is but a dream within a dream.” -Edgar Allan Poe

Perception. Consciousness. Reality. Philosophers have grappled with these concepts for eons, trying to define things that are undefinable and concretely grasp the most abstract of ideas. Awareness is the most complicated concept of all, it’s what puts us at the top of the food chain, yet it is also the one thing that creates our anxieties, our fears, our hopes and, yes, our dreams.

Inception, the latest film from Christopher Nolan, who also brought us the trippy Memento and the soul-searching Dark Knight, is a visceral interpretation of all the possibilities of awareness, perception and consciousness—and all they could be, destroy and create. Arendt and others may have written and philosophized about the life of the mind, but Nolan has visualized it. And the result is a film just as confusing and complicated as perception itself.

Unfair or not, it is impossible to watch Inception and not be reminded of The Matrix, another film about the bent nature of reality and perception. The theme of questioning reality is common to both films, yet Inception is not just about questioning reality but of embracing the illusion—the one we each create in our minds when we dream. Dreams are the pathway to the subconscious, the canvas upon which each of us paints our deepest emotions, our most hidden fears and our most intimate desires. Within our dreams, our minds travel to their depths, where we are capable of almost anything—and believe it. Dreams are where we reveal who we really are. Inception is about stealing that knowledge, bending that perception, and altering our reality.

If only the execution were as awesome as the concept.

The reality of this film is that you spend so much time absorbing the ideas and following the premise that you barely notice all the ways it hurts itself as a movie. Inception is a thoroughly intellectual film, steamrolling over any emotions with cold, calculated precision. Everyone and everything has a purpose. And yet, in typical Nolan fashion, the multitude of action sequences feel completely out of control and make me long for that same cool exactness we see in the rest of the film.

What is Inception about? It is about people who can infiltrate dreams and either steal or plant ideas within your subconscious while you are sleeping. Yes, cinematically, the possibilities are endless and Nolan makes the most of his scintillating visual style, giving us a screen-full of dream-like inventions, distortions and illusions—a CGI-lovers’ dream.

But the stunning visuals are unfortunately hampered by the performances, too many of whom are wooden and performed with hardly any passion or emotion at all. Leonardo DiCaprio, a highly skilled actor who has tremendous presence on a movie screen, comes across like a narrator—talk, talk, talk— and is forced to set up the complicated premise and then just act it out. It’s funny to have the feeling he is wasted when he is in nearly every scene, but this is not a film about actors and the limitations of the character make his performance feel restrained and shallow.

Ellen Page is similarly lost here. Her presence in this movie, somewhat odd to be honest, is without much depth and she is, like the other actors, no matter their skill, merely a vehicle through which the concepts travel. And even the brilliant Marion Cotillard—who can usually do no wrong—isn’t able to inject much humanity into this film which is supposed to be about the essence of being human.

Inception is filled with wonderful actors, but this is completely and utterly Christopher Nolan’s movie. As the writer and director, Nolan crafts a movie that is visually stimulating and intellectually riveting, but still leaves you a bit hollow inside. His love for chase scenes and his inability to film them well hamper the film greatly, as does the preponderance of gunfire and painfully confusing editing.

But Nolan’s films have always been about the concept and ideas. And Inception is able to overcome all of its flaws by giving us something real to chew on, by not insulting our intelligence and daring us to imagine, question and expand our intellectual constraints.

The reality of this film may be that it’s not perfect, but it stimulates the brain with visuals and concepts that are both glorious and intoxicating. Free your mind, and the rest will follow.