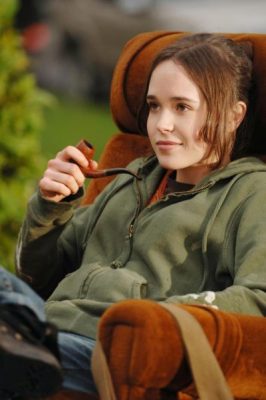 There’s really nothing worse than a word that’s overused. Especially in Hollywood, where it happens a lot. Hyperbole and exaggeration seem to be the rule, not the exception here, which makes it even harder for me to say what I’m about to say.

Juno is the wittiest, freshest, and most enjoyable time you’ll have in the theatre this year. Maybe this decade. I can’t call it original, because snappy dialogue I have heard before. Likable characters are not a new concept. However, Juno just fits its pieces together in a way that feels so new and does it in such a smart and unassuming way—you don’t even realize you’re smiling until your face starts to hurt. It’s not a simple film, but it also doesn’t try too hard, and when was the last time you could say THAT about a Hollywood film?

Great. There. I’ve built it up too much. However, unless you’ve been under a rock, I wasn’t the first one to do that. I do hate it when that happens. The small(er) independent film comes out, and everyone dances around and proclaims it the Next Great Thing and expectations get too high and it usually can’t live up. It happened with Sideways, and it happened with Little Miss Sunshine. Well, Juno runs circles around both of those films, in character, content and creativity. People have fallen in love with this little film because it speaks to them, and people can relate to it.

But that’s not why it’s a great film.

Juno is a great film because it is so unexpected. From the very first scene to the very last, there is nothing that is said, done or believed that is trite or formula. First-time screenwriter Diablo Cody (kudos kudos kudos) creates characters who are real, not caricatures that we are so used to seeing. She also does something so unusual and rare: she creates familiar and relatable situations and characters, but then never once takes them down a familiar path. This film is the definition of the word FRESH. It seems so over-used, so trite, so boring, but, in the case of this film, it is so true.

The story itself is rife with opportunities to go down the easy, well-worn path. The title character is a teenage girl who finds herself pregnant. Instead of an abortion, she chooses to have the child and give it up for adoption. She finds a couple, makes an agreement with them and the rest of the film is spent experiencing the highs and lows of teen pregnancy and the inevitable anxieties and melodramas that would naturally arise with such an unusual circumstance. In Juno’s life are the “typical” hard-bitten father, protective yet somewhat distant step-mother, cheerleader best friend, and gawky boyfriend, who observes from the sidelines. Not to mention the yuppie couple ready to adopt her unborn baby. You probably have lost count, as I did, of how many movie-of-the-week or teen comedy potential scenarios I just laid out, but Juno never once goes there. Ever. No matter how familiar anything may seem or feel, it turns every scene into something new, makes every character real and fresh, and takes you on a journey you’ve never traveled before. And yet, you’ll still feel like these are real people experiencing a real situation.

And yes, although the screenplay is the soul of the film, everything is owed to its heart, the actress who plays Juno, 20-year old Canadian Ellen Page. Page is so refreshingly bold and endearing in this role, not since Frances McDormand’s performance in Fargo has an actress’ personality so defined a film. Page is strong and vulnerable and unbelievably charming. She wins over the audience from the first scene and her Oscar nomination is well-deserved. This is truly her movie.

That’s not to say the supporting cast isn’t exceptional as well. Everyone is strong, from Jason Bateman and Jennifer Garner, who play the adoptive parents, to J.K. Simmons and (my personal favorite) Allison Janney, who play Juno’s parents, to Michael Cera, who plays her boyfriend, but what is key is that nobody outplays anyone else. Much like the screenplay, the acting performances are pitch-perfect and never taken too far over the top.

That’s the thing about Juno. It has a lot to say. About people, about life, about love, about relationships, about society, about believing in each other, about believing in yourself. It’s got a big “theme:” teenage pregnancy. Oooh. But it’s quite an odd thing. You almost forget it’s about teen pregnancy. And you don’t really realize all the “issues” it deals with or the things it has to say until you’re miles away from the theatre. You don’t realize it because you’ve had such a good time getting to know these characters, spending time with them, hearing their stories, CARING ABOUT WHAT HAPPENS TO THEM.

In the end, isn’t that all we really want from a film?