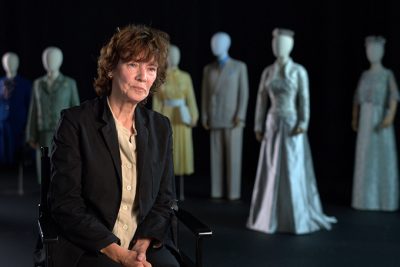 Season four of Netflix’s acclaimed drama series, The Crown, focuses on the emergence of Princess Diana, played by Emma Corrin, as a force to be reckoned with, perhaps the biggest challenge yet to face The Queen (Olivia Colman) and the entire royal family. Costume designer Amy Roberts, who also designed the costumes for season three, and is creating the costumes for season five, has the unique challenge of designing for one of the most famous—and most photographed—women in the world.

I recently had the chance to speak with Roberts about how she approaches designing for a character such as Diana, and what creative license she feels is necessary to tell her story, as well as the rest of the family. Our conversation covered many interesting topics, including who her favorite character is to design for (hint: it’s not Diana), if she thinks the real royal family watches The Crown, and the one time she saw Diana in real life, which was just as exhilarating as you would think.

Catherine Springer: Was there a difference in your preparation, from seasons three to four?

Amy Roberts: Yes, there was. I remember, having watched seasons one and two, the big thing for me about season three was the change of color palette. Because, as you know, seasons one and two were coming through the post-war years, when the color palette was so different. And I remember reading three, and thinking, I really want to do this because, suddenly are in the 60s and into the 70s. As a designer, I see the big picture, I see the whole 10 episodes as one big movie, one big opera. If I don’t see that straightaway, I’m not excited enough. So, from season three to four, the Queen and Margaret, those established Royals, were in a totally different place. They were steadier, or the Queen was steadier, I think she’d probably ironed out the problems within her marriage. So I just thought the general color was more Earth, if that makes sense, and then into this, you have this young, naïve girl Diana, who’s thrown into the lion’s den. She’s a refreshing person to stir things up, so her color palette, like you see on the Australian tour, which was pinks and greens and fresh and very 1980s. And then of course it all slowly goes to pot. I do have a little picture in my mind’s eye of a really big painting, where I can see the colors.

CS: These are, obviously, some of the most photographed people in the world, so you want to be accurate, but how do you approach the design element? Talk a bit about creative license.

AR: Yeah, I have to do something else, otherwise it’s just copying. So, like Peter Morgan, the writer,says, it’s bookended by real events, like the wedding dress of Diana’s, like the engagement suit,so I think you do have to honor people’s memory of those and you do have to do that pretty accurately. But there are huge ways in the story where it is made up. You don’t know what happened, so I think you can run with that and be more imaginative. The process is that initial vision of it, then it’s researching and researching and then, I always tell people, then you’ve got to throw that out the window. Chuck that out, and you bring something of yourself to it, visually.

CS: Each character has their own style. Whose style do you enjoy designing for the most.

AR: Oh, I love doing Margaret. I love her, because a wild card. She’s pretty interesting, quite angry. Well, she’s in a rotten role, isn’t she? And then also what Helena Bonham Carter does with that, that kind of wonderful, sort of off the wall, slightly eccentric view of things, it’s very stimulating to work with people like that. So I think that is a driving force, who that actor is that you’re given. And Gillian Anderson as Thatcher. I mean none of these people look particularly like those people. So I think that’s a terrific guide, that they bring something else to it that isn’t just spitting images of those people. The story, and what Peter Morgan does, is more than that.

CS: Speaking of Thatcher, one of my favorite moments of the season is a costume related moment, when she is completely dressed inappropriately for the hunting at Balmoral. Talk a little about that scene.

AR: Yes! Well, that was so much in the writing of this extraordinary woman and her husband arriving into this weird world, but that was very much Paul [Whittington], the director, really wanted to push that visual image of them being outsiders. And I think Thatcher was a very urban woman,she was not happy or comfortable in the countryside, so I know Paul wanted to get that. He knew exactly the shot on that Scottish hillside, natural colors, heather and greens and browns. He said, I want something really synthetic, so we would show him blues, he said “make it bluer!” We got it so bright, you almost needed sunglasses to cope with it. I love the way—do you you remember when she walks out, and you’re not quite sure what she’s wearing?

AR: I think he shoots through the Land Rover, and then she’s revealed…

CS: Yes, when you see the shoes first.

AR: Yeah. I think he was pushing that separateness, that she was still a kind of lower middle class woman who’d made it, but still felt uncomfortable in that environment, and that color choice pushed that.

CS: To get to get back to Diana, in all your research for her, of course one of the most celebrated figures in all of history, and certainly her fashion has always been talked about, is there anything that you learned that surprised you about her style and her fashion?

AR: Well, maybe it’s just looking back at the 80s, but was did surprise me was how unexciting some of her clothes were. I think what I mean is, she was more than her clothes. I think what was unique about her, and some people have it, this innate, golden glow. And I felt it was more about that than the clothes she wore. That’s what I’ve come to believe about her because you go to series five which I’m working on now and I know we can’t talk about…

CS: No matter how much I want to! I’m so excited!

AR: I know! But just to quickly say, don’t repeat this, but just wearing a pair of jeans and a navy blazer, which is pretty average clothing, you don’t look at anybody else in the room or in the photograph. There’s something about her.

CS: What was it, do you think?

AR: I think you get that with people, people like Thatcher as well, who are driven people who are innately driven by something. I’ve seen it a couple of times with actors. I don’t know what it is,they’re almost sprinkled with magic dust or something. I saw one of your American presidents, Clinton. It was at the theater, and we’re all sitting waiting for the performance to begin. And suddenly there was a kerfuffle and Bill Clinton walked in with his bodyguards, and he had the same thing, this golden glow. I don’t know why they’ve got it but they have. Whether it’s good or evil, I don’t know. I saw Diana once in reality and it was in a shop off Kensington Heights, near the palace. I remember, she slightly turned, and it was like a golden beam of light. It’s silly, isn’t it? But what I’m banging on about is that she’s more than the clothes. Much more.

CS: As a Brit, did you feel any extra pressure before you started on this project and have your feelings about the royal family changed since working on it?

AR: It’s changed my attitude about the Queen, everybody will say that, and I admire her tremendously. I am not a Royalist, never was, didn’t grow up in a family like that. I thought, if I start worrying about who I’m dealing with, I won’t leave the front door. So I don’t think about that. I view it, as I always say to people, as if it’s this big opera of this dysfunctional family. I hold on to that thought, rather than to go, oh my god it’s the Queen or it’s Margaret. Otherwise, I couldn’t do it, I don’t think.

CS: Do you know if they watch?

AR: I think probably the younger Royals do. Yeah, I mean I would if I was them. I think they probably do, but I’m sure that the Queen, and Philip, when he was alive, had much better things to do! [laughs] She probably watches the horse races, I would imagine, much more than her life story, I suspect.

This interview has been edited for clarity and brevity.