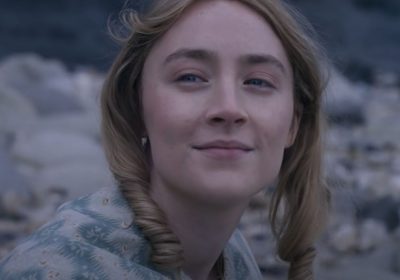 Actress Saoirse Ronan has come a long way since her breakthrough role in Atonement (2007) when she was just 13, earning the first of her four Oscar nominations. Now 26, the American-born Irish actress has spent the last 13 years building a reputation as one of the best young actors in film, starring in films such as The Lovely Bones (2009), Hanna (2011), The Grand Budapest Hotel (2014), Brooklyn (2015), Lady Bird (2017) and last year’s Greta Gerwig triumph, Little Women, in which she played the coveted role of Jo March, which earned her her fourth Academy Award nod.

Ronan now stars in Ammonite, a 19th century drama which co-stars Oscar winner Kate Winslet as two women who fall in love against the backdrop of fossil-hunting, the sea and a patriarchal society. The headlines about this film will obviously be the sex scenes between Ronan and Winslet, two of Hollywood’s top actresses, but Ammonite is so much more than that.

I recently spoke to Ronan about what she hopes people take away from the film, what it was like to shoot those sex scenes, how this movie opened her eyes to restrictions of costumes, and what her secret is to overcoming her difficult-to-pronounce name at Starbucks.

Catherine Springer: You’ve done a lot of period pieces in your young career so far. What draws you to them?

Saoirse Ronan: I’m a bit worried now, because everyone keeps saying that! There really isn’t anything in particular…I think it’s just by chance that it keeps happening. Hopefully, one of the things I’m doing next year is not period. Depending on the movie, you can be very restricted, but I think the ones that I’ve done, certainly recently, have been me playing a sort of a trailblazer and a rule breaker. So whenever I’ve been in period pieces, it’s tended to be playing women or girls who are a bit of an outcast. Whereas with this, this was probably the first time ever that I played someone who was the girl in the pretty dress with the corset. She was very much a woman of her time and someone who, in terms of lifestyle and the type of life that she led, was very typical of a woman of her background and age. And so I did feel quite frustrated initially, playing her, because there was so much in terms of expression and physicality and even in the way I spoke, there was so much that I couldn’t do because society at that time wouldn’t have allowed me to. It was my first insight into what other women I’ve worked with in these period films have gone through where they’d be like, “for god’s sake, I can’t do this!” and I’m like, “I’m fine!” but that’s when I’m playing Jo March or someone who’s allowed to do whatever they want. [laughs]

It’s almost as if you’re rebelling against the costumes as well. I saw that [director] Francis Lee said he wanted you both to get very physical. How was it doing all that physicality, with those costumes and the limitations of the character?

It was a pain in the arse! [laughs] Which is good, because that allowed me to have some sort of insight into the frustration that Charlotte has to keep a lid on for most of her life until she meets Mary, which is why I think it’s such an awakening for her, it’s so enlightening when she allows herself to take down those barriers. Also, all of this pent-up energy that isn’t being put into anything. She’s assisting someone in their work, their artistic work, the business side of things, as well as the manual labor, and I think , for me, more than anything, that’s what I find fascinating about this piece, about the real Mary Anning, and the relationship between Mary and Charlotte that’s all borne out of work. The relationship that starts to develop between them definitely blossoms because they help one another and put their heads together to really make something beautiful.

It’s a very, very delicate piece, and so each moment and each scene was very quiet, very underplayed, very still. There aren’t big, dramatic moments in this movie, so it is harder, actually, to have an idea when you don’t have these pinpoints of how the overall film is going to look while you’re making it, you know, you don’t have the big “oh, this is where she realizes this!” and then she starts to change and she starts to break down and then she recovers…it isn’t as clean cut at that.

Incredibly internal. So we sort of had to take it moment to moment. So, in a way, it was sort of a surprise to me when I did finally see the film because I knew Francis had in his head what he wanted this film to be, but in terms of the overall scope of it and the narrative, we had done three different endings which they were going to play around with in the edit, so yeah, it was really interesting to see what he finally put together of all these creative, quiet moments on set.

There weren’t a lot of dramatic moments, except maybe for the sex scenes. You really haven’t had a lot of passionate sex scenes in your career so far. How was it to explore that?

I always find it interesting. The most I had explored that was in Mary, Queen of Scots, when it was during the Renaissance and everybody was at it, you know. It’s really interesting, in a way, to explore different intimacies depending on the decade that your film is set in and how different sex is to certain people depending on what time period you’re even in. In terms of me personally, I’m lucky in that I never really seem to get nervous doing scenes like that, but I guess the difference with this was that, because we obviously have a gay, male director, in terms of what women respond to, we would have a better insight into that that he would [laughs]. So he was very good at allowing the two of us to put our heads together and go, ok, what do we want this to be. It was Kate and I who choreographed all of these very intimate moments. There needed to be an escalation from one sex scene to the next, to have them take it a step further every time and that was really interesting for us to play around with. We literally wrote down notes, “step one, she’ll put her hand on her shoulder, step two, she’ll nuzzle her neck, step three, she’ll lift up her skirt,” or whatever. And the control was completely in our hands, which, in terms of the sex scene, was something I had never experienced to that degree before. So it really did feel like a safe space. I mean, I’ve been really lucky with any intimate scene that I’ve done, I’ve always had a really great crew, that I felt safe around but, definitely this was the first time that I had stripped off in that way and having mainly girls in the camera department obviously made a massive difference. And you know, it was beautiful, but it’s weird, people probably don’t want to hear this, but as an actor, you really do see it purely as a technical thing, you are absolutely not having sex. It’s not even like when you’re kissing someone, you say, “yeah, I kissed someone today,” it’s so far from sex. You are trying to find this passion and emotion that would exist, of course, but then you’re like “ok, then I’ll put my foot here and…” [laughs]. But yeah, we had a lot of control over what kind of direction it went in, which was lovely.

And I understand that he let the set be all women, to make you even more comfortable?

Yeah, we had a lot of girls on set and it’s very unusual to have an almost entirely female camera department, that’s very unusual, so that was great.

I’m running out of time, but there’s one thing I’ve always wanted to ask you, what is the name you give at Starbucks?

I usually give my Mom’s name, Monica. You can’t go wrong with that!

And one last thing, we are both huge fans of Bridesmaids. In Bridesmaids, which character are you?

Em, I want to have a bit of Melissa McCarthy’s character but I think I’m probably Annie. I’m a combination of Annie and Lillian, I would say.

Well, from your Grand Budapest Hotel role, you do have the baking roots like Annie, so there you go!

That is true. But I do hope my life isn’t in tatters the way hers is!

This interview has been edited for clarity and brevity.
Interview originally published on AwardsWatch.