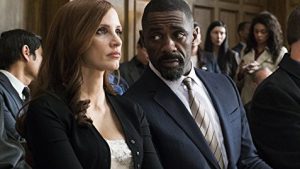 Anyone who knows me knows what a fan I am of Jessica Chastain. She can literally do no wrong for me, as a performer. That’s not to say I haven’t been disappointed in some of her choices, especially lately. Her last movie, Miss Sloane, gave us yet another incredible Chastain performance in an underwhelming movie. Her current movie, Molly’s Game, is, sadly, very similar. It’s yet another movie that can’t rise up to what she brings to it and ends up being a waste of her talents and our time.

What makes Molly’s Game such a big disappointment is not just that Chastain feels wasted, but that it seemingly had such potential. It is the directing debut for one of Hollywood’s most famous writers, Aaron Sorkin, of whom I am usually a big fan. A Few Good Men, The American President, Sports Night, Moneyball, Social Network, not to mention The West Wing, Sorkin’s writing has been something I have sought out and rarely disappointed. His rapid-fire, witty and politically suave dialogue never relented, never compromised and never dumbed it down. As a writer, nobody does what he does.

But, as a director, Sorkin leaves so much to be desired. Molly’s Game, both the book (which I read) and the script, are fast-paced, highly detailed and hold your interest (although Sorkin turns the story into a courtroom/legal plot much more than the book does). The overall movie, however, as directed by Sorkin, just lays there, letting the words and acting do all the work. There is literally nothing memorable about this movie. He even manages to get a bad performance out of Idris Elba. How does that even happen? His shot selection, the editing, the entire tone of the movie—it’s all so bland, so ordinary, so…dull. How can the same guy who wrote one of the most exciting courtroom/legal movies create such a boring one here? He literally takes the most exciting and captivating parts of this story—the poker players and their games—and glosses over them, choosing to spend the majority of the movie in small rooms with two characters talking and, you guessed it, in a courtroom. Well, I guess it wouldn’t be Sorkin if it didn’t. But Sorkin the director can’t keep up with Sorkin the writer and it shows.

Chastain, however, as in Miss Sloane, finds a way to rise above the material. The script, being Aaron Sorkin, is still better than average, and Chastain is always miles above average, so Molly’s Game might hold your interest, especially if you have an interest in the details of poker. But, overall, Molly’s Game is far too talky, stationary and color-less for you to place any money on it.