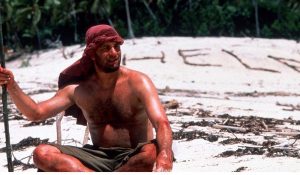 Reuniting Forrest Gump director Robert Zemeckis with star Tom Hanks, Cast Away promised many things. The one thing it is delivering is awards. Talk about a showcase for an actor! A guy is stranded on a desert island for eight years with nobody to talk to. And that’s the majority of the film. It’s a more realistic “Survivor,” except Hanks’ character goes home without the million. Did it work? Well, Tom Hanks still has the star power to draw in the crowds and he still has the screen talent to keep you interested. But the scenery often overshadowed the film itself, for me, and I found myself just wishing he would be found, already. The unfortunate ads on television give it away that he actually does get off the island. There was so much more that could have been done that wasn’t. And there was so much that was done that didn’t need to be done. I don’t know how else to say it. Cast Away works, and is a wonderful performance (again) from Tom Hanks, but it just left me emotion-less. And I think the film-makers were going for a different result.