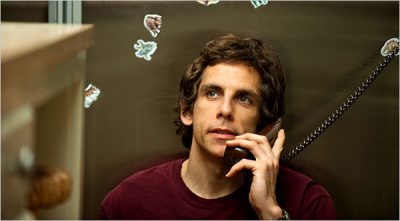 I’m turning 40 this year. I have angst. Think it’s a coincidence that I’m drawn to movies about the meaning of life lately?

Already within the last year I’ve seen two movies that pondered a theme akin to “what are we doing with our lives?” and “what’s the meaning of life” in Away We Go and A Serious Man. While Away We Go is more along the same lines, thematically speaking, as Greenberg, a new film from Noah Baumbach starring Ben Stiller, A Serious Man is more in the same ballpark philosophically. By that I mean that poor Larry Gopnick of A Serious Man was truly lost, seeking meaning in a world that seemingly had abandoned him, more specifically a god that had seemingly abandoned him, even though he had never lost faith. However, in Greenberg, the roles have reversed, in that Stiller plays a character, Roger Greenberg, who has lost faith, in whatever he ever believed in, and has lost his way, but never seems to abandon the belief that he deserves better, no matter what a gigantic jerk he may be.

What I don’t understand is how some critics are attempting to make us believe that this film will make us feel better about ourselves. Like somehow the same theory abides that by watching The Jerry Springer Show, Intervention, Cops or Cheaters will make us feel better about ourselves: “hey, look at how terrible their lives are, at least we’re not as messed up as they are.” Schadenfreude rules the day.

So Greenberg is about a guy who’s miserable. And lost. He’s 40 and doesn’t know what to do with his life. He’s bitter, angry, unloved and generally cranky. He’s disappointed with life and the choices he’s made and he has just gotten out of the mental hospital and will be house-sitting for his brother in Los Angeles for 6 weeks. There’s your story. Well, you can throw in a few other lines about the fact that he makes a lame attempt to reconcile with an old flame (Jennifer Jason Leigh), and he attempts to repair and maintain a longtime friendship (the always awesome Rhys Ifans), but the significant relationship Greenberg makes is with his brother’s personal assistant, played solidly by Greta Gerwig, as they get involved in a semi-romantic entanglement that messes him up emotionally though he doesn’t even know it—or, apparently, want it.

Words like “personal” and “self-conscious” and “insightful” keep popping up in commentary about this film. That’s baloney. This film is just a pure example of midlife neuroses gone beserk in the form of a loser who’s done nothing with his life. This film would have a lot more to say and be much more soul-searching and deep and—dare I say it—interesting, if the lead character were someone I actually cared about. But, unfortunately, Stiller plays Roger Greenberg as a narcissistic, privileged, insensitive, humorless prick. And the only thing I was rooting for him to do was go away.

It’s kind of hard to get involved with your main character’s soul-searching journey when you just don’t give a shit.

OK, I can understand if a character is vulnerable, and I can understand when a character is flawed and insecure. These are things I understand. It is a beautiful thing to see a character who is unique and different, multi-dimensional and textured, layered and complicated on screen. Nobody wants to see a cookie-cutter with transparent personality and predictability. These are all things we can agree on. There are characters who can be cranky and bitter, hardened by life and somewhat lost, who can still be interesting to watch and not turn you off. Want examples? Bill Murray in Lost in Translation. Jack Nicholson in As Good As It Gets. When you’re doing comedy, especially comedy that is a little dark, as Stiller is trying to do here, you must find that fine line between being a jerk and still being able to get that endearing chuckle that warms your heart while still making you slightly uncomfortable (which Murray and Nicholson were able to do) and just being a flat-out, cold, unfunny, unemotional ass. The difference is the ability to connect. And that just plainly comes down to Stiller’s lack of acting skills. He just isn’t a good actor. He’s good at what he’s good at, and that’s screwball comedy, which doesn’t require any emotional connection. He probably was hoping he could be the same crossover artist that fellow pratfall expert Jim Carrey was with serious fare Eternal Sunshine of the Spotless Mind and The Truman Show, but, alas, Ben…it’s just not going to happen.

Greenberg’s failure is not all Stiller’s fault, however. The script has no map whatsoever, as it wanders aimlessly from point A to point V. But I get that continuity is not the point here. This is about a guy desperately in search of himself, just trying to hold on, and a story arc is certainly not what anyone making this movie is going for. But some semblance of a structure would have been nice, if for no other reason than just to make sense.

In the end, all the navel-gazing just got to be a little too much for me. I know Woody Allen isn’t making these kinds of movies anymore, so we have to make them for ourselves now, but come on…..can’t my generation come up with something a little bit better to serve our angst than this? Well, maybe Charlie Sheen has lost his shirt in Wall Street 2 and we have that to look forward to. We can dream.