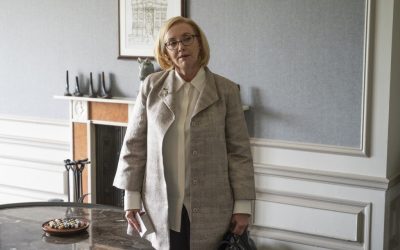 As the world patiently waits for the third season of the Emmy-winning HBO drama, Succession, to premiere (date still unknown), fans can use the time to revisit the near-perfect first two seasons of the devastatingly brilliant show about a criminally rich and magnificently dysfunctional family full of horrible people doing horrible things. Wherever there are rich people doing dastardly things, there are lawyers and actress J. Smith-Cameron has received unanimous praise playing Gerri Kellman, the crafty and steely family lawyer who moonlights as a punching bag (who doesn’t?). Smith-Cameron, who asked for our interview to be delayed a week due to the previous week’s national unrest, found time to talk to me about Succession, even though we both acknowledged it feels a little trivial to be talking about television at a time like this. Even so, she was able to revel in the joy of her daughter having graduated (via Zoom) from high school the day before. She agreed it’s important to find the moments of joy in all the grief.

I talked to Smith-Cameron about what it’s like to fine tune a character like Gerri, how she approaches the unknown journey of her character and how she feels about one of the strangest and most talked-about relationships in television.

AwardsWatch: Succession is an interesting show to talk about now, it does feel escapist, because it’s a world so few of us know, but, at the same time, it’s a very weird show to enjoy right now, because it is about that 1%…

J. Smith-Cameron: Well, in my perception, and, granted, being in it, I obviously have a different standpoint, even though I watch each episode when it comes out, like a regular audience member. I never know what’s going to be in each episode. My husband watches with me, it’s the first time he’s seen it—he doesn’t even read the scripts because he loves to watch it unfold. Anyway, it seems to me that it really skewers the 1%, so it’s not exactly a guilty pleasure.

And I was thinking that the joy for us is that nobody is happy!

That’s true! [laughing] There are no winners, despite their wealth and power.

There’s nobody who’s not flawed, either. What is Gerri’s biggest flaw? Is she flawed for sticking around?

Yeah! She’s a mercenary, I would say, in a very general sense. They call her a killer. She dispatches her work without too much judgement, which I relate to, because that’s basically what actors do, if they’re good. They try to depict their character without judging them, they just sort of try to articulate it. I think she represents this family, but part of the fun of the character is that she finds herself rolling her eyes at them, and wincing. I think it’s a comment on them a little bit, the family, that she sees how awful they are. Her flaw is that she’s a mercenary, but also that she can’t quit them. I’m not sure what Jesse Armstrong would say but it feels like… there’s a point in season 2 where Gerri asks Frank, “why are you still here?” And I think she wonders that too. They all half expect to get the chop at any moment because of how capricious the Roys are and how capricious the moment is in the world—that’s the nature of it anyway.

[laughs] But I don’t think of that as a flaw, though! First of all, she didn’t start it! [laughs]

No, that’s right! But at the same time, what made me cringe was I always felt a bit of a maternal thing between them, did you feel that at all?

Well, I’m certainly old enough to be his mother, but I don’t think that was ever the nature of their relationship. I think what happened last season came out of the blue. I feel like, for her, when I look back on the season—you have to look back on these things for yourself as an actor, and reflect a bit because you don’t know at the beginning of the season how the season’s going to end, so I didn’t know whether that relationship with Roman was going to last through the season and I didn’t know how it would grow or what they would make of it. Which was good, because that’s certainly how Gerri feels as it’s unfolding. She’s kind of shocked and bemused and thinking on her feet as to how to cope with it. There’s an episode, I think it’s the “boar on the floor” episode [S2, E3], where he’s all hungover the next day and she gives him business advice. There’s a tenderness there that we haven’t seen from either character. I don’t think it’s quite maternal, but I feel there’s a rapport between them. He’s all id, everything he thinks comes right out of his mouth without censure and Gerri is the opposite, she’s very careful, she plays her cards very close to the vest. So he must be appealing to her in some heady way, but I don’t think she ever anticipated the nature of their relationship. But I still don’t know what Gerri must think of him. Early on in the season, we saw her express some care and concern about how he was going to survive. And even in the notorious bathroom scene, she feels sympathy for him, finding out about Shiv the way he does in that episode. She’s not a very tender woman, and it’s not a very tender universe, the whole Succession universe, it’s not one that really allows for human feelings [laughs].

And, to that end, it’s almost as if theirs is the most pure and honest relationship on the show. They both are playing some sort of game and they’re just going with it…

And also, it seems like….I always feel funny answering these kinds of questions, because I don’t know what the writers have in mind and I’m trying to hold back my own imagination in some way, trying to just freeze it where it left off last season, to protect that sort of innocence about what happens next in the story, if you can believe it. If you let yourself go, you might imagine what’s happening next, without even realizing you’re doing it, and you might have a terrible time acting your part when you get there because the writers may have gone in a completely different direction. So it’s this unnatural thing of trying to step outside of the head of the character when you’re not there.

There are reasonable reasons, aside from whatever attraction may be coming from either one of them, they have mutual interests, in term of the Succession storyline. You can see how they could be a team competing in the master plan. So, aside from whatever else between them, you can see how they might become allies. But I can’t speculate too much about that because I’m just fascinated to see what Jesse and all the writers will come up with. Really, I’m not just saying this, it’s really such an inventive, smart and funny group of writers. And then, oddly enough, even though it’s such a creative group, they also take a lot of cues from us. They do this thing where they leave the camera rolling and we’ll just behave like what we think would happen in the next moment. Sometimes they’ll use it or sometimes down the road they’ll use it, like a joke of Kieran’s might show up in Roman’s words, so it’s really fun. They study us like a National Geographic special! [laughs] So it’s a really collaborative and creative experience.

I can tell you enjoy it, but how do you approach it differently than, say, theatre, where you know your character’s whole journey when you start? Are you enjoying not knowing where your character is going?

It’s a little bit scary. I was one of the series leads on the show Rectify and I came off that not too long ago. My character had a pretty consistent through line, and I had the sense of that. You have to do that with a character, you have to create a backstory for yourself, but you can’t be too caught up in it because nobody, not even the creator of the series, really knows where it’s going, that’s the nature of the beast. There are too many variables built into TV that aren’t in film and theatre. You don’t know how many seasons you’re going to go, let alone what the story is, on this kind of show, so you have no choice but try to embrace it. So it’s kind of a weird hybrid of a normal acting job and almost an improv type job. At the end of the day, on a television series, the actor, of all people, is really the one constant. Of course, the creator, who oversees the whole thing, sure, but I’m the only one who always plays Gerri. There will be a different director, a different writer, different assistant director, so in a weird way, you’re the one who’s keeping track of the disparate elements of the character. I remember when I was on True Blood, I played this awful character. Some directors you could tell thought she was funny, some directors thought she was a victim of abuse and some thought she was a manipulative abuser. I suppose she was all those things, but I was the one who had the one master idea for that character and I had to always check in with myself. That’s kind of a wonderfully empowering delight for an actor that you don’t usually experience until you get a part on a good, thoughtful television series.

Lastly, I am obsessed with that yacht from the last episode.

Do you have any fun stories of what it was like for all of you, shooting on a set like that? The rest of us will most likely never set foot on a yacht like that…

Nor will I, ever again! [laughs] I’m not the best one for the funny stories. But some of the younger actors would. Like the scene with the slide, the actors who were already in their swimsuits, they would go on doing that all day. Gerri couldn’t—I couldn’t mess up my hair and makeup! Sometimes, Sarah Snook, as she was getting ferried back and forth to the land where our hotel was, would sometimes ask the driver of the boat to stop so she could just jump into the sea. [laughs]

This interview has been edited for length and clarity.
This article was first published on AwardsWatch.com.