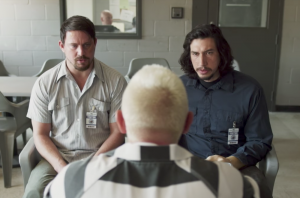 There’s no way it could be this simple. Fifteen minutes into watching director Steven Soderbergh’s latest film (his first in four years), Logan Lucky, I felt this wave of joy come over me that was so unexpected. My most favorite Soderbergh film, Ocean’s Eleven (2001), was about eleven guys who come together to plan and execute an elaborate robbery of a Vegas casino vault, in arguably the best heist movie of all time. And now, here I was, 16 years later, watching a movie set in rural West Virginia about a couple of brothers who get their friends together to….rob the vault of the Charlotte Motor Speedway? This was finally the Ocean’s Eleven sequel I’d been waiting for!! (I understand there were two actual Ocean’s Eleven sequels, but did you see them? They totally don’t count.)

Logan Lucky is not only a welcome return to film by Soderbergh, who has been focused on television in recent years (The Knick and Behind the Candelabra), but is a movie that features a director firmly back in form, not only giving us a version of his greatest hits, but giving us a movie that’s entertaining, charming and fun. Logan Lucky stars Channing Tatum and Adam Driver as Jimmy and Clyde Logan, two down-on-their luck brothers who struggle to make ends meet. Clyde has a theory about their situation: he feels his family is cursed. So, whether it’s to prove Clyde wrong or because he needs the money, Jimmy decides it’s time to steal some. And there’s no greater opportunity than the Charlotte Motor Speedway, especially since he is working on the crew that is working construction under (yes, under) the site. Reasons really don’t matter here—these guys don’t come off as career criminals the way they do in Ocean’s Eleven—because once the plot has been revealed, the movie takes off like a, well, racecar, and the ride is fantastic.

Jimmy and Clyde get together a ragtag crew to pull off the job, including an explosives “expert” named Joe Bang (Daniel Craig, in a marvelously against-type performance) and his two dimwitted brothers, Fish and Sam (Jack Quaid and Brian Gleeson). Also on the crew is Jimmy and Clyde’s beautiful but deceptively sneaky sister Mellie (Riley Keough), whose unexpected intelligence provides some of the best gags in the movie.

And that’s the thing about Logan Lucky. It is hilarious. Soderbergh has proven he has a way with comedy with all the many moments in Ocean’s Eleven and Magic Mike, but here his skill is on full display, as I found myself laughing out loud many times—something I rarely do in the theatre. The real trick of Logan Lucky, considering the characters and the setting, was to make sure the audience was laughing at the jokes and not at the characters. It’s a fine line, when you have a movie whose characters are so easy to lampoon. Poor people from the south are so easily portrayed as cartoons, but here, they are characters with real personalities, flaws, charms and wit. It could have been so easy to go over the top on these portrayals, but every one is perfectly tuned, especially Driver and Craig, who both prove they have true comic chops and own the movie when they are on screen.

Sadly, there are two performances that do go over the top—way over the top—and I’m still trying to figure out how and why Soderbergh let them through. One is almost understandable, which is Seth MacFarlane’s horribly ham-fisted portrayal of a mega-rich racecar sponsor. Understandable because MacFarlane, while a brilliantly gifted creator of television shows such as Family Guy and American Dad (and a talented singer), just CAN-NOT ACT. An even bigger headscratcher, however, is a performance that comes in late in the movie, which is Hilary Swank as the detective investigating the robbery. Lest we forget, Swank is the owner of TWO Best Actress Oscars, so we know, without a doubt, that she CAN act. But what she does here I’m not so sure of. It’s an awkward and, yes, cartoonish performance that I still am wondering the purpose of.

MacFarlane and Swank’s off-putting performances aside, Logan Lucky is a finely executed movie that’s so much fun from the start. While technically a heist movie, it doesn’t feel like one because there is so much emphasis on character and personality—it’s not just about the scheme.

Two last things: in this political climate, I have to say it’s nice (and welcoming) to see a slick, Hollywood-produced movie about lower class, rural Americans. Soderbergh really pays homage to the culture and personality of a place that’s so easily mocked or written off, and he does it subtly and generously.

And, finally, I just can’t help but point out a very fun fact about this movie. Whether intentional or not, the cast is riddled with children (or grandchildren) of famous actors. I choose to think of it as intentional, another moment of Soderbergh charm:

No matter what, Logan Lucky is a fun, entertaining and utterly charming two hours in the theatre. It is clever, funny and well worth your time. Welcome back to the big screen, Mr. Soderbergh.