Too Much, Actually
Originally reviewed November, 2003 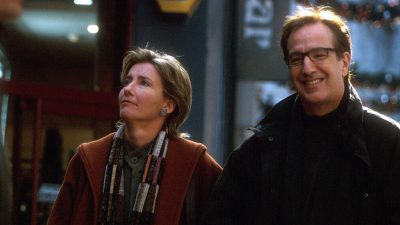 Ever wanted to scream at the movie screen? It usually happens to me when I see a gross waste of talent, like in Mixed Nuts or Toys (look them up, you’ll wonder why you’ve never heard of them), and other times it happens when my emotional journey is so contrived and forced, like in Titanic or The Bodyguard. Funnily enough, there is one film that gave me a double-helping of primal scream inspiration: Love, Actually.

And it’s not that I’m not a sap. Quite the opposite. I’m the biggest sap there is. I’m a hopeless romantic, a total sucker for the machinations of a Hollywood love story. But there is a basic necessity that even I require for that queasy feeling to develop in the pit of my stomach….a story. Love, Actually is not a collage of stories, despite how they’re trying to sell it. Instead, it is merely a group of circumstances. We are looking in on various people in different circumstances in their lives. Recently widowed, recently divorced, recently cuckolded, recently dumped, etc. And what do they all do? Fall in love with the first person we see them bump into. Of course. Do we see a relationship develop? No. Mainly because there isn’t enough time. Any one of these stories could make a movie, but, instead, they probably devote no more than fifteen minutes to each of the eight or so stories that we witness.

It’s clearly a message movie: it’s the Christmas season, which means we all need to be reminded of the glory and healing power of love, blah blah blah. I am the world’s biggest fan of screenwriter Richard Curtis’ previous movies, Four Weddings and a Funeral, Bridget Jones’ Diary, and Notting Hill, but each of those films had real stories and each had a journey. You may have known that the characters were going to end up together, but you didn’t know HOW they were going to get there. THAT was the fun part. This film telegraphs the course of every relationship so early on that you are just left to sit and watch it play out. Maybe the difference here is that Curtis just wrote those previous films and he actually directed this one, for the first time. Big mistake. When you can actually FEEL yourself being manipulated, that’s the worst feeling of all.

I take it back. The worst feeling of all is seeing Emma Thompson wasted. And Alan Rickman. And Colin Firth. And Laura Linney (don’t get me started).

For a crash course in Hollywood romantic comedy, see Love, Actually. They are billing this film as “the ultimate romantic comedy.” No kidding. It’s Romantic Comedy 101. Too bad the course is so condensed. And so shameless. There’s every type of heartache represented here: new love, comfortable but stale love, unrequited love, lost love, betrayed love, puppy love, even devoted sisterly love. There’s even politician- and rock star-love thrown in for good measure, to prove that even famous people have hearts. Gag.

This whole film is just too much. The message is poured on so thick, I was half-expecting cue cards to show up telling me to “CRY NOW.” Of course, only a hard-hearted soul wouldn’t feel something watching this film, if for no other reason that it covers its bases so well. No matter what situation you are in currently in in your love life, this film has a story line for you. Whether you succumb to the plodding intent to get you to tear up and feel all goopy inside, well, that’s up to you. But don’t say you weren’t warned.

My rating: * = wait for video (and watch it only on a sick day when it’s a choice between this film and Dr. Phil)