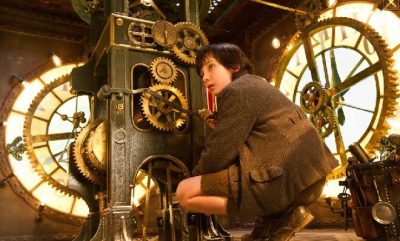 Who knew he had it in him?

The Martin Scorsese we know makes movies about the mob, hitmen, criminals, lowlifes, and the seedy underbelly of urban America—dark, violent and intense.

But apparently, there is another Martin Scorsese, one that we never knew existed: a dreamer.

More often than not, I hate it when a director goes outside his comfort zone. So many times we’ve seen it: a director, flush from success, jumps on the chance to pursue his dream project, a “labor of love” that he could never have made when he was just starting out. This vanity project is usually something personal that nobody can relate to or wants to see, but the studio greenlights it because they want the director to make another blockbuster/Oscar winner for them next. So they let the hot director make the little movie about something nobody cares about, nobody sees it, and life goes on.

Unless, on one of those rare occasions, the labor of love is a work of true cinematic genius. And we ALL go see it. Such is the case with Hugo, Martin Scorsese’s love letter to his childhood, to movies and to dreaming in general.

Yes, Hugo is a wonder. It is a delicious carnival of light, color and movement that will absolutely wow you. Word is Scorsese made this movie because he wanted to make a movie he could take his own kid to (I guess Goodfellas didn’t fit the bill), and the result is one filled with heart and childlike innocence—two things never before found in a Martin Scorsese film.

But it’s not the innocence of Hugo that makes it what it is. No, the basics of the movie itself, the acting and writing, which are the most innocent of all, are pretty ordinary. In fact, the whole movie could have been about 30 minutes shorter, laid the sentimentality on a little less thick and featured a lead actor with at least a thimbleful of personality.

BUT. Hugo is not a movie about the acting, the writing or the running time. Hugo is not about deep thoughts or analytical dissection. It is a feast meant to be consumed right then and there, and every flavor is meant to linger on the tongue. And linger it does.

If you’ve noticed I’m this far into this review without telling you anything about what the movie is actually about—well, that’s on purpose. The only thing you need to know before going to see Hugo is that it is a fantasy, full of whimsy and imagination. And you will love it.

Scorsese has created a magical visual masterpiece with Hugo. From the opening shot through the entire film, he masters every element of the visual medium, and even a newer one—this must be seen in 3D on the big screen—to create one of the most exhilarating visual treats I’ve ever seen. Director Scorsese may be getting the credit, but production designer Dante Ferretti (Sweeney Todd) and cinematographer Robert Richardson (The Aviator) need to equally share in the plaudits. The one thing I couldn’t help thinking while watching the movie was that I felt like I had been dropped into a pop-up book. That’s really how it is as an audience member, as you are swallowed—happily— by the visuals. The camera seems to never stop moving, but sometimes you wish it would, if for no other reason than to take in every detail of the gorgeous set pieces. Every single shot is meticulously created—you can just feel the love and sincerity that went into every frame of this movie.

And although Scorsese may not have hit the mark dead on with the casting of the boy who plays the lead (Asa Butterfield, who plays Hugo), there are some excellent supporting performances that flesh out the movie and make it come to life, particularly Sacha Baron Cohen, who is a master at playing the buffoonish, cartoonish oaf who you just can’t help but adore. His perfect blend of smarmy and sweet is a gift to a film like this and makes it all the more rich.

Rich is perhaps the best word to describe Hugo. It is a feast for the eyes, in every sense, but it also aims its target squarely at the heart, pulling you in and never letting you go. This is, by far, Scorsese’s most personal film, as his love of movie history is front and center. But, to be honest, I really don’t care why Martin Scorsese made Hugo. Let’s just be happy he did.