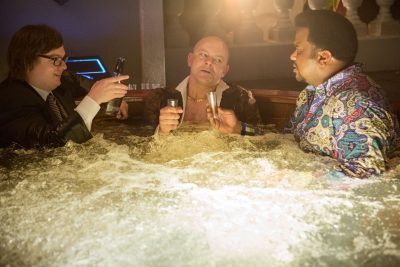 I knew it was bad when I heard a Depeche Mode song being covered in a Payless Shoes commercial a few years ago. That meant I was now the key demographic for advertisers. Worse, it meant the ‘80s were now trendy and hip and we were going to have to live through the decade of leg warmers, MTV (when they actually played videos) and Alf all over again.

It has all now come to fruition with the success of Hot Tub Time Machine, a movie about, well, a hot tub time machine that transports four lowly schlubs from 2010 back to 1986 to see if they can do anything different with their lives.

Obviously, the best parts of this film are the references, both subtle and oh-not-so-subtle, to the decade that muted color tones forgot. From the music to the clothes to the hairstyles to the pop culture references, they nail it all. Although it did make me wonder if all the teenagers in the theatre were really getting all the same jokes that we were—have kids today even heard of the movie Red Dawn or seen the video for Motley Crue’s “Home Sweet Home”?

While there are inside ‘80s jokes throughout (you have to keep your eyes peeled for all the stunt casting), Hot Tub Time Machine is not a gimmick flick. After the big loaded “reveal” scene, which is hilarious, the film settles into what it is really trying to be: a raunchy buddy picture that could be set in any decade.

Adam, played by John Cusack (who, as a major star in the ‘80s himself, was perfect casting here) and his two buddies, Nick and Lou, played by Craig Robinson and Rob Corddry, have all wandered away from each other and have found themselves stuck in varying states of adult decay, far away from their youthful dreams of fame, fortune and eternal bonds of friendship. When they are brought together by fate (or destiny?), they decide to go away to a ski lodge in the mountains where they spent the best times of their lives—when they were young, vibrant and hopeful. Back in 1986, of course.

So, yes, they unknowingly get into the hot tub of time travel, which takes them back to the decade of decadence, and, once there, they realize they have the chance to do it all again, but, should they do it all the same, or take this opportunity to make better decisions and alter their paths towards a different destiny?

Yeah, it’s not that deep.

But, amazingly, title of film notwithstanding, the filmmakers actually give more than a half-hearted attempt at inserting a meaningful story into what would otherwise be a purposeless jokefest. The subjects of “what have I done with my life” and “if I could go back and do it differently” and basically all the “what ifs” we live with every day as we trudge through our daily lives are touched on in some basic way here. It’s not brilliant, but it’s interestingly simplistic enough to be touching. And, still, they manage to work these moments of honest reflection in amongst all the crudeness—amazingly, it works.

Did I mention Hot Tub Time Machine is raunchy? I think we have a new Webster’s definition of the word. Not crude, not crass—raunchy. What’s the difference? It’s all in the context, the delivery and the attitude. This is a movie about buddies who have gone back in time, to a ski lodge in the middle of some sort of Winterfest sort of thing, surrounded by girls, music and drugs, and they need to re-live their youth, prove themselves to each other and find themselves again. Let’s just say there aren’t a lot of barriers in this film and there aren’t many lines that don’t get crossed.

But that’s not what makes this film raunchy. What makes this film raunchy is Lou, played by Rob Corddry. This character is one for the ages. Imagine Stifler played by Joe Pesci and you get Lou, the crudest, rudest, loudest, most foul-mouthed loser friend you could ever imagine having. And didn’t we all have one of these in high school? And, as you grew up, didn’t you do everything you could to shake him? Well, for Adam and Nick, they weren’t quite able to lose him, so they were stuck with him. And his presence in their lives makes everything more interesting, volatile and absolutely out of control.

And Corddry’s performance is out of control. In a good way. He is so outrageous and disgusting, you can’t help but laugh out loud as you’re cringing. Without this character, Hot Tub Time Machine would be just another average buddy picture, but Corddry elevates it to new debaucherous heights and gives us so many gut-busting moments that you may just double over in hilarious disgust.

There is no ounce of subtlety in Hot Tub Time Machine and the sentimentality that is here is handled with the delicacy of a bulldozer. But there is male bonding, and there is a tangible sense that these guys have a shared history, neither romanticized nor trivialized, and it somehow, through all the coarseness, rings true. What saves this movie from its own descent into frat house pointlessness is the characters’ grasp on their individual vulnerability. Cusack does a good job here at not getting too sappy or trying too hard to “act” and Robinson plays the straight man with gusto.

But Hot Tub Time Machine is thoroughly Corddry’s picture. He even steals the movie from the ‘80s gimmickry. He’s obnoxious, he’s loud, he’s selfish, he’s in your face, he’s everything you wish you could get rid of. Kind of like the ‘80s.